The Sunday Brothers' cabin is a location in the Mire region of Appalachia in 2102.

This large two-story cabin belonged to Jesus and Juan Diego Sunday, who lived in before and after the Great War. They also operated a bar and moonshine distillery from their property's borders. When they decided to join the Free States, they turned their cabin and bunker into an official distillation center for the faction, producing moonshine for the Free States and their affiliates. They worked closely with Vault-Tec University students to create an accelerated distillation machinery, which came in very handy after the Great War. The Sunday brothers turned out to make a killing on the product, with the one issue being that their factory attracted the attention of ornery, mutated wildlife. The two of them defended their livelihood, setting up a profitable relationship with Harpers Ferry, trading moonshine for ammunition.[1]

Juan later met Brianna Hawke, who would eventually prove their undoing. After the fall of Harpers Ferry to the scorchbeasts, Hawke and her survivors arrived at the cabin, following JD. Jesus believed that she was manipulating his brother and scared them away with a shotgun, refusing to share their supplies with them.[2] However, Juan continued to give them supplies in secret. When Jesus discovered it, he decided to confront his brother. The situation spiraled out of control, escalating into regular warfare. It culminated in a gun battle during which Jesus shot his own brother, Hawke's group set fire to the fields around the cabin, losing most of their number to the flames, and Jesus himself died of a gunshot wound on top of the rocky outcrop, by the distillers that gave them wealth - and misery.[3]

The property consists of a house with two sheds and a field behind it. There are multiple non-functional alcohol stills remaining from prior alcohol production operations still dotted around the location. There are two entrances to the main house which has three floors. The ground floor contains a bedroom with a bunk bed, a long bar, and a large living area with two fireplaces. There is also a desk in the eastern section of the level which often has a bobby pin box sitting on it.

The upper level contains a bedroom in the southwest section which contains two sets of bunk beds. Under one of the bunk beds may be a magazine, partially hidden beneath a rug, and sitting on the same bunk bed is an imported Chinese panda toy. There is a door in the northern end of the level which leads out to a balcony. The balcony has a set of stairs which leads back down to the ground level outside.

The makeshift bunker in the building's basement can be accessed via a set of stairs behind the bar and through a locked door at the bottom of the stairs. Inside the basement is a prepper's paradise with many cans of preserved food such as vegetarian ham, Cajun rice & beans, canned coffee, and imitation seafood, all guaranteed to last through the nuclear apocalypse. The basement also contains a small kitchen with two fridges, a living area containing a couch, television and beds, and a bathroom with a shower stall.

There are multiple crafting stations in the large barn behind the house including a weapons workbench, tinker's workbench, chemistry station, and brewing station. There is also a cooking station next to the eastern wall outside the house. The large barn also contains a terminal sitting on a wooden desk, next to a locked floor safe (Picklock 2). The smaller barn does not contain much of note.

The vegetable garden behind the house contains sixteen wild corn, five wild gourd blossoms, four mutfruit, six razorgrain, and four tatos. There is also a water tower sitting on a rocky outcrop which overlooks the property. Jesus Sunday's corpse lies next to the tower beside a sniper rifle.

The Sunday Brothers' cabin appears only in Fallout 76. 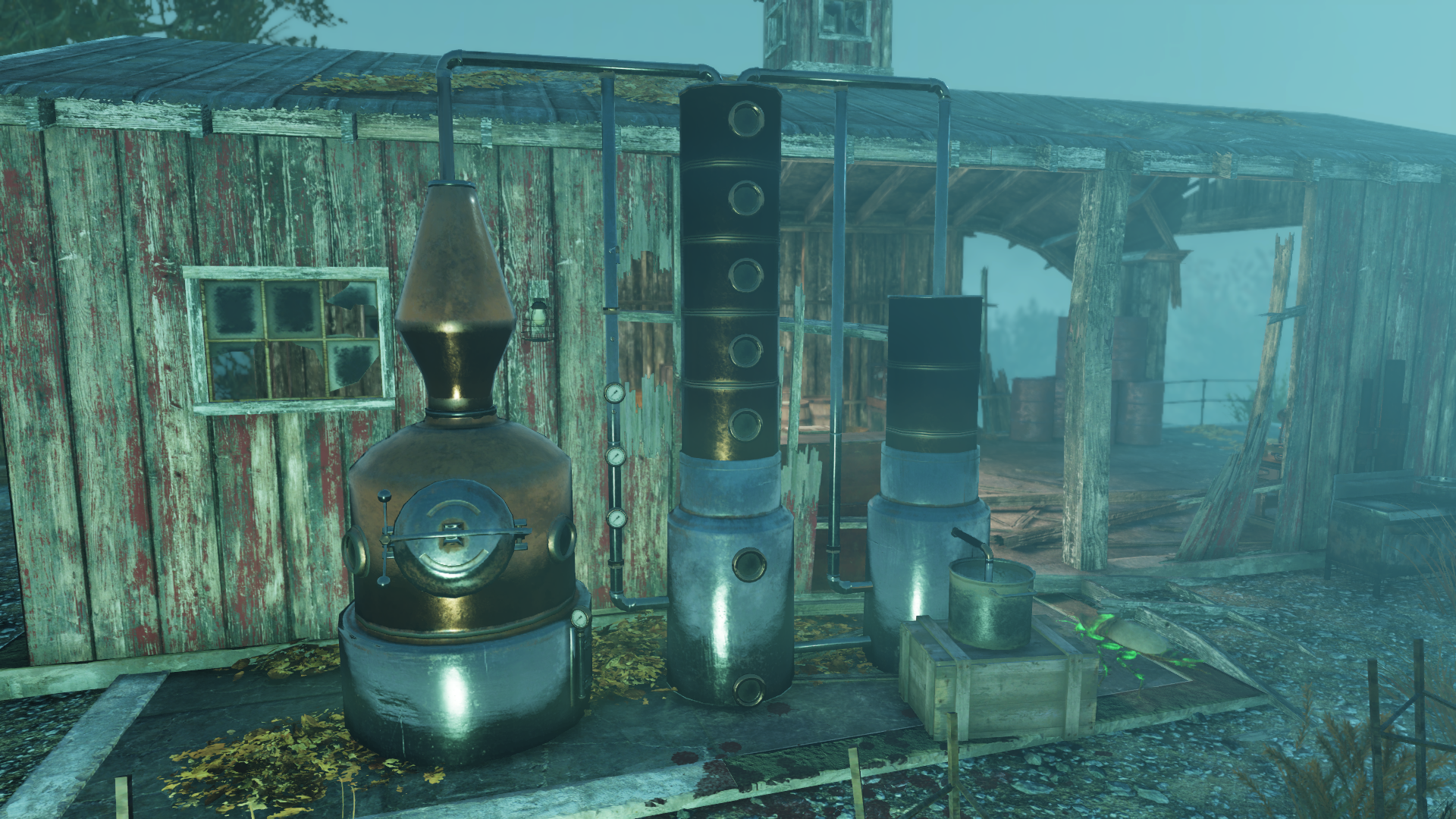 First of the three alcohol stills 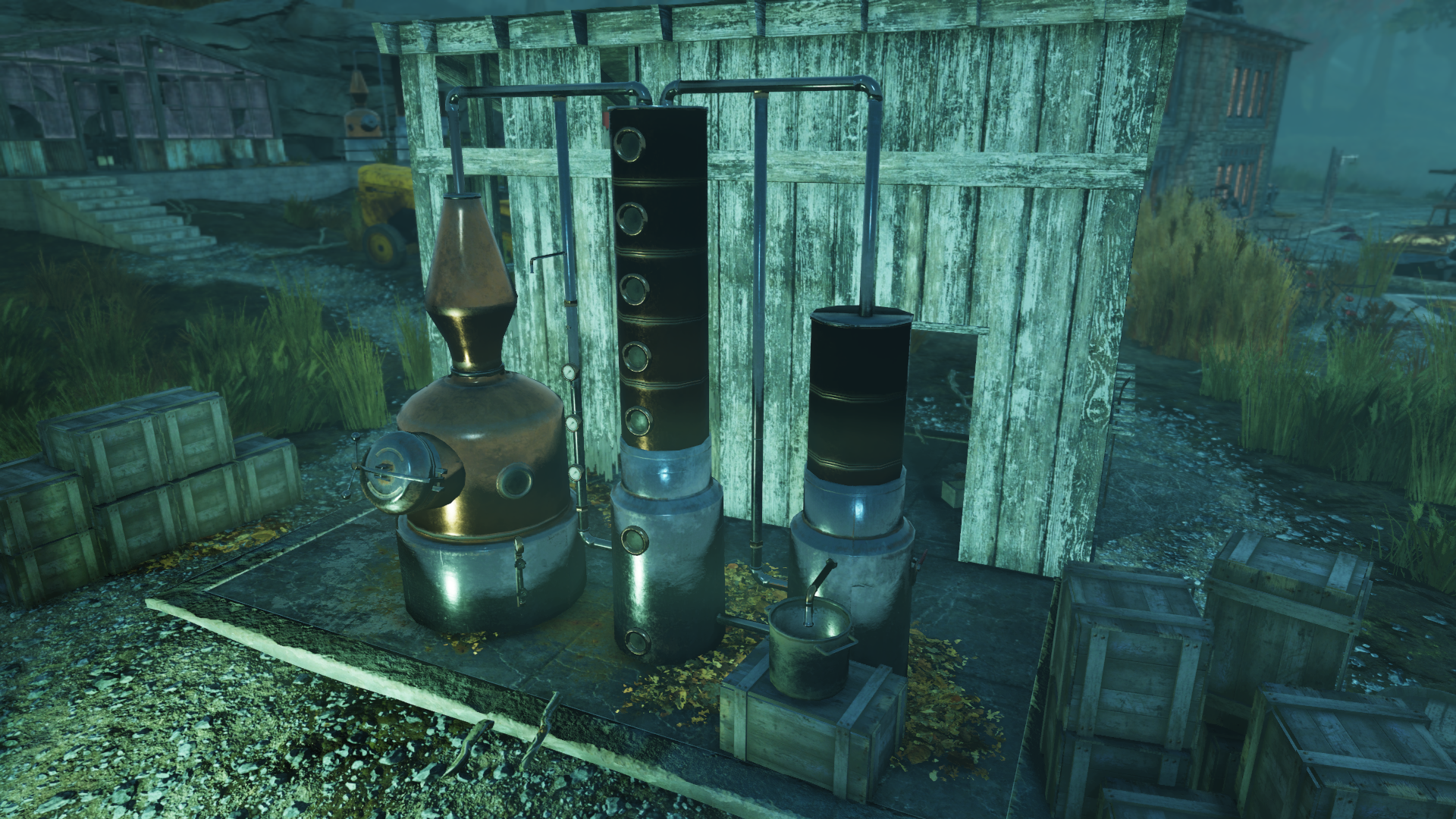 Second of the three alcohol stills 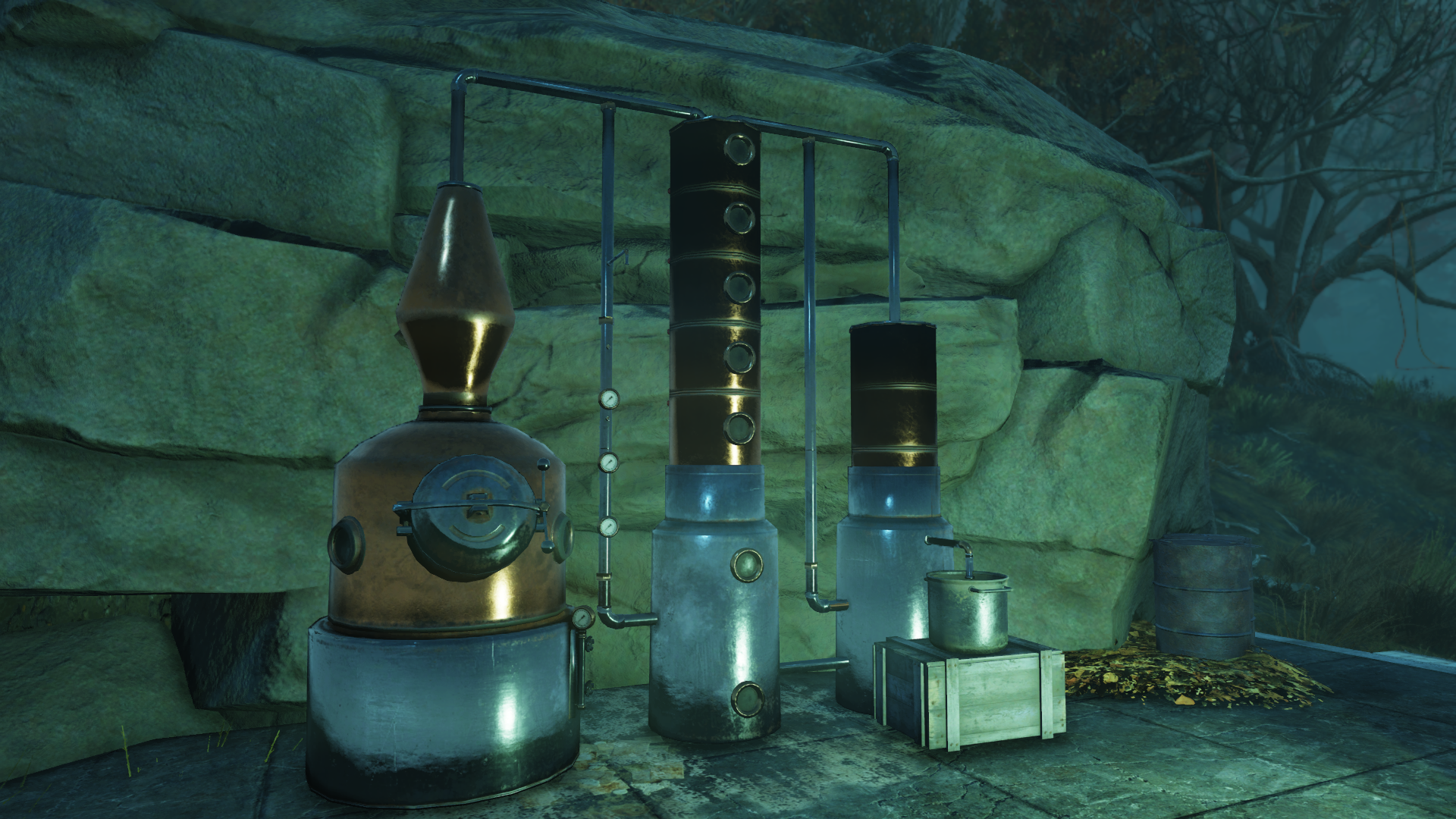