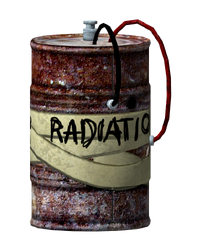 The Nuka-grenade is a craftable thrown explosive in Fallout 3.

Nuka-grenades are crude, yet effective, bombs consisting of a sealed tin can filled with Nuka-Cola Quantum, Abraxo cleaner and turpentine, which react with one another to explode. Around the middle are several strips of masking tape and the words "RADIATION" and "DANGER" written on both sides in black marker.

When thrown, the grenade erupts into a great blue and orange fireball. Its power is bested only by the mini nuke and the bottlecap mine (with perks). Flames and radiation linger for a few seconds after the explosion.

Thrown grenades are affected by physics; they will bounce and roll based the surface(s) they come into contact with when thrown.

Originally, the Nuka-grenade was planned to be designed in a form of a bottle, resembling the Molotov cocktail.