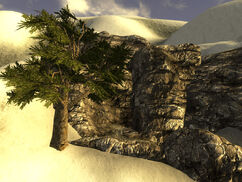 The entrance is the gate within the rock formation.

“I'm not convinced that the nightstalker mutation is a natural one, and I need someone to investigate their lair for proof.”— Henry

Full of stunning stalactites and other ancient rock formations, Charleston cave has remained closed for hundreds of years since its discovery in the early 1960s, and subsequent geological instability. Once the home to a hold-out during the Great War, night stalkers now roam these empty chambers.[1]

此洞內至少盤踞著十個以上的夜梟, making a trip through the cavern a perilous game of hide and seek.

The cave itself is a series of winding rock tunnels with several spacious caverns scattered throughout the stone labyrinth. The dark cave is dimly lit by many clusters of green, bio-luminescent non-harvestable mushrooms.

South from the entrance is a chamber with 2 mattress beds and a campfire.

From the campfire chamber, a large chamber with several night stalkers is to the west. A balcony that overlooks the chamber (from whence the largest group of night stalkers can often be sniped) can be accessed by keeping west instead of veering off south and looping down to the large chamber.

Looping around east then south is a small flooded area where a bunker built before the war can be found (see below). The door to the bunker is locked, with a Lockpick skill of 75 required to open it. There is a large amount of loot in the bunker room.

門口處有一塊掏空的岩石with graffiti of a heart on it.

貌似怪的頭會卡在牆上，沒法一槍爆頭。If you do not have a weapon powerful enough to kill one in one shot (regardless of body part), it will become unstuck upon changing to attack mode.[已核实] 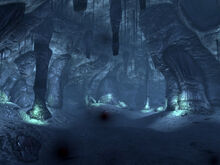 Oh, Baby!, lying next to a dead nightkin