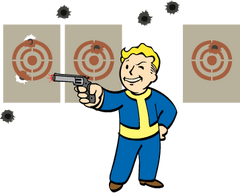 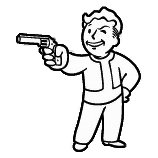 “While using a pistol (or similar one-handed weapon), your accuracy in V.A.T.S. is significantly increased.”— Fallout 3 in-game description

Gunslinger is a perk in Fallout 3, Fallout: New Vegas, Fallout 4 and Fallout 76.

While using a pistol (or similar one-handed weapon), your chance to hit in V.A.T.S. is increased by 25%.

As with all perks that increase your chance to hit in V.A.T.S., this bonus is multiplicative, not additive.

Ranks 2 and 3 each add 25% range, for +50% total. Rank 4 gives a 6% chance to disarm. Rank 5 increases this to an 8% chance to disarm, plus adds an 8% chance to cripple the limb you hit. In addition, if Nuka-World is installed, Gunslinger now becomes a crafting perk, mainly required for certain upgrades to the Western revolver.

“Channel the spirit of the Old West!”

Gunslinger affects the following semi-automatic pistols, as well as their unique variants: