Jack Cabot is a scientist living in the Cabot House in Boston in 2287.

Born sometime in the 19th century, Jack is the son of archaeologist Lorenzo Cabot. In 1894, his father led an expedition to the Rub' al Khali in search of the fabled Ubar civilization. After Lorenzo returned to Boston from the Middle East with an alien artifact, he was found to have been granted supernatural abilities, yet also been rendered insane by the effects of the crown. For the safety of both Lorenzo and those around him, Jack, as superintendent, imprisoned the archaeologist along with his artifact at Parsons State Insane Asylum in 1898.

Jack devoted his life to investigating the artifact. His studies into the mysterious object subsequently resulted in the development of a serum derived from his father's blood that defied aging, halting and even reversing the process. In turn, Jack's special serums granted him and his family the ability to live for more than four hundred years.

More than two centuries after the Great War, he continues to live in Cabot House with his mother and sister, furthering his research into a cure for his father's insanity.

Jack Cabot appears only in Fallout 4. 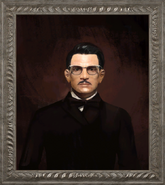