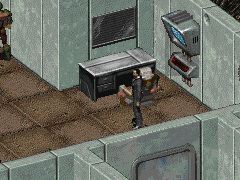 “Their leader, AHS-9, has been abducting and brainwashing our children. Kill him for the good of the Shi and I shall tell you how to speak to the Emperor.”— Ken Lee

Ken Lee of the Shi has one final assignment for the Chosen One in order to grant him an audience with the Shi Emperor: kill the leader of the Hubology cult, AHS-9, the Great and Terrible. The target resides in the cult's compound near the Golden Gate bridge and can be reached by asking AHS-7 to see him or disabling the energy forcefields.

After breaching the outer defenses, it is a straight path to the head nutjob's office. Killing AHS-9 can be done through combat (this turns the entire compound hostile except Crocket) or with the patented superstim method. Either way, the Chosen One will have to get out of the Hubologists' base and back to Ken Lee for the reward. Killing him in direct combat will result in the Chosen One being locked in by the forcefields. The force fields can be disabled by using the Repair skill (70% required) on the force field emitters, which are directly beside the fields themselves.