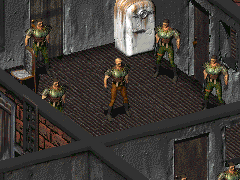 Kill Metzger is an unmarked quest in Fallout 2.

The Chosen One must kill Metzger, the leader of the Slaver's Guild. While there will be 1000 XP added immediately after killing him, it should be kept in mind that all the slavers in his room and in the rooms around it will retaliate in response.

The Chosen One can then go and tell Becky that Metzger is dead. Becky will then offer $1000. If the reward is refused, +50 karma is given instead.