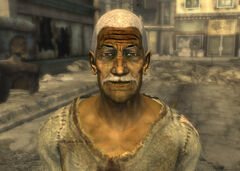 “You don't strike me as someone down on their luck. What brings you to Westside?”

当NCR对他们开始清洗后，他们继续向东逃亡，在莫哈维废土分道扬镳。阿卡德提到他时会称其为“多年来将我们凝聚在一起的关键。” Afterwards, Judah became a trader for a time, before finally settling down in Westside.

For Auld Lang Syne: Judah is one of the Enclave remnants that the player character has to track down.

Judah in the ending slides