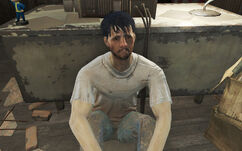 “Some days are harder then others, but even the hard days get easier than the one before.”

Jun Long is a settler traveling with Preston Garvey and his group in the Commonwealth in 2287.

朱恩·隆是與加維在槍手的威脅下從昆西逃出來的平民之一。 He and his fellow citizens were forced to seek shelter in the Museum of Freedom in Concord when they were attacked by a band of raiders.

他與他的妻子瑪西還有一個兒子凱爾，只是凱爾並沒能在路上倖存下來，這使他陷入了抑鬱之中。Jun is currently recovering from the loss of his son. He has high hopes that the Sole Survivor will find their own son, Shaun.

Jun Long appears only in Fallout 4.