The Moon is an astronomical body seen throughout the Fallout series.

In 2020, the Delta IX series of rockets were commissioned by the United States Space Administration, which underwent missions to the Moon, one of which was the 17-day Zeus 12.[4] In 2052, the final manned mission to the Moon occurred, and during this, the flag left by the Valiant 12 was recovered and brought back to Earth, where it was put on display in Washington, D.C.'s Museum of Technology.[3]

American forces are mentioned as having fought at the Sea of Tranquility, on the surface of the Moon, to secure the nation's freedom.[5] Private civilian ownership of land on the Moon was considered illegal,[6] although souvenir Moon rocks were allowed.[7]

The phases of the Moon are the shape of the directly sunlit portion as viewed from Earth. The lunar phases gradually and cyclically change over time. In all first-person games, this is directly observable in the sky.

Close up of the Moon on the Lucky 38 poster from the Fallout: New Vegas intro

The Moon shining over Jacobstown in Fallout: New Vegas

At dusk in the Mojave

The Moon in the fog over the Commonwealth

Over the mountains in Appalachia

A mural in the Museum of Freedom in Fallout 4, depicting an astronaut 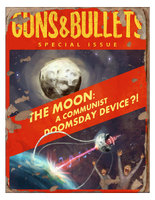 Wish upon a Star achievement image