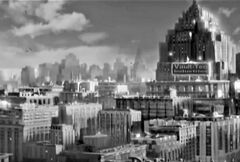 The Boneyard, also known as Angel's Boneyard after it became one of the states of the New California Republic, is the overall title given to the collective of settlements built in the remains of Los Angeles, named for its devastated skyscrapers, reduced to their metal "skeleton", and for the actual skeletons of the dead that littered the city after the Great War.

The majority of the inhabitants of L.A. who survived the nuclear blasts died in the ensuing weeks and months due to radiation poisoning, disease, famine, and violence. The city itself was ravaged by fires and aftershocks by the massive concentration of atomic explosions, with places such as Orange County on the outskirts being left as craters. Some inhabitants took shelter in the demonstration Vault, and eventually, most of them emerged in 2092, founding the Boneyard. Many of them were the founders of Adytum, a fenced section in the suburbs of the old Los Angeles. Some, however, founded gangs such as the Blades and the Rippers.

In the 2150s, a pack of deathclaws appeared in the Boneyard, taking over the base of the Rippers. In 2159, Jon Zimmerman, the town's mayor, hired a band of mercenaries known as the Regulators to help protect Adytum from the deathclaws and attacks by raiders, who by 2161 were in control of Adytum.

By 2189, the Boneyard became one of the states of the New California Republic and Adytum became known as New Adytum. Many, during this time, also began to refer to the Boneyard as the Angel's Boneyard. As one of the largest cities in NCR territories, it was a natural choice for many organizations to place their headquarters. Thus, by 2281, the Boneyard is host to the Republic's Reserve and the Follower's Boneyard Medical University among many others. As the NCR now has control over the Boneyard, it has become much more stable, with multiple, but nowhere near all, buildings rebuilt, redecorated and renovated. However, Razz suggests it is not the best place to grow up, indicating the NCR still has much work to do, likely revolving around threats from super mutants, ghouls, raiding gangs, and large amounts of radiation.

The Boneyard can be found one square west and seventeen squares south of Vault 13.

The Boneyard appears in Fallout and is mentioned in Fallout 2, Fallout: New Vegas, Honest Hearts and the Fallout Bible.