“Its shear size, coupled with its trademark sound, is enough to send anyone in its path running for cover. It's a great weapon for suppressing fire, letting others flank the unsuspecting enemy.”— Research Note - Minigun

The Rockwell made minigun or CZ53 personal minigun[1] is the most commonly encountered big gun in Fallout 3.

The first model was the favorite weapon of the Mariposa super mutants during the Unity's time, and allowed most or all of the super mutants to wield them effectively with only one arm.

Since it is so common, the minigun is comparatively easy to find and repair, as well as one of the few big guns easy to find ammunition for; nearly every super mutant brute encountered with one has at least 30 5mm rounds for it. It is also carried extensively by Brotherhood of Steel units, Brotherhood outcast units, Enclave soldiers, as well as occasionally on some raiders and slavers. This is offset somewhat by the minigun's high rate of fire, which quickly uses up ammunition. Although it consumes ammunition as quickly as the Gatling laser, the minigun is designed as a sustained-firing weapon, and its rate of fire of 20 rounds per second means that it can fire up to 240 rounds in only 12 seconds of continuous firing. Because of this, those who intend to make use of it should buy additional ammunition, which is generally quite plentiful and cheap at shops.

The minigun can fire a total of about 3333 rounds, the equivalent of 14 reloads, from full condition before breaking.

Use of the minigun in V.A.T.S. 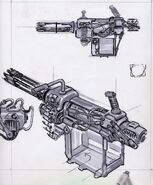