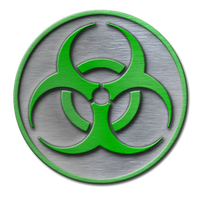 新瘟疫，[1]又被称作蓝色流感，[2]或者Limit 115，[2]是一种可以在人际间传播的病毒，最早出现在21世纪中期的美国，让美国不得不在2053年的时候，彻底关闭边境，自我隔离。[3] The epidemic became the driving force behind the Pan-Immunity Virion project that paved the way for the Forced Evolutionary Virus.

Limit 115 was a secret, genetically-engineered weapon designed by scientists working for ether the United States government or the shadow government later known as the Enclave. The intent was initially to create a virus that would sterilize the infected people, to be used on enemies such as China.

The virulent nature of the plague and the speed at which it spread led to the first-ever national quarantine of the nation and the closing of borders, as tens of thousands die.[6][7] In 2055, 为了治愈病毒，威斯科技建立了威斯科技研究设施。[1] Despite their efforts,他们都没能研制出解药and the plague continued to spread in the 2060s, fueling national paranoia. The government used the rising paranoia to discourage assemblies, fuel anti-communist sentiment, and encourage informing government forces of suspected subversive elements. The government further used New Plague to register civilians, claiming a symptom of the plague was "socialist thoughts" and advocating isolation: people should stay indoors, read books and avoid "Ice cream socials". Furthermore, people were told that if they believed they were infected, they were to contact a disease control center, such as the disaster relief outpost in Point Lookout, for isolation immediately.[4]

However, despite extensive quarantine measures and research, 解药的研发依旧遥遥无期。到了2062年, the New Plague continued to spread throughout the nation, increasing the death toll further.[7] West-Tek was ultimately unable to develop a cure. The West Tek company had close ties to the federal government, and their work in viral research eventually led to them being chosen for the Pan-Immunity Virion Project in 2073. The project was in response to China's aggressive use of biological weapons, and although unsuccessful, it later laid the groundwork for Forced Evolutionary Virus.[1][7]

In February 2077, FEV research was leaked to the world through an unknown source, which leads to widespread protests in many major cities and governments around the world, as well as accusations that the U.S. was responsible for the New Plague in the first place.[7]

望海崖那些swampfolk有可能是a result of a combination of a mutated version of the New Plague, inbreeding, FEV, and radiation.citation overdue

During the decade between 2277 and 2287, 麦奎迪的兒子邓肯病倒了，感染介质是个迷，身上出现了蓝色水泡and high fever，症状与新瘟疫异常相似，although this information may not be true, as the virus Prevent was to cure only 感染的青少年 and children.

After the War, NCR科学家Victor Presper, through extensive research, discovered the history of Limit 115 and那潜在的强大种族灭绝能力, and also discovered a viable means to cleanse the world. Using ULYSSES, the quarantine prison, and a ballistic satellite known as B.O.M.B.-001, the way to human planetary domination and order became clear. He needed to get to B.O.M.B.-001 and use the nuclear weapons to clean the filth and wretch that currently occupied the surface.

Presper and his followers 将病毒散播到remote areas near Boulder and Denver. It was close enough to the quarantine prison to spur ULYSSES into action, but not near enough to huge populations to start a general panic. Presper’s men would then stage an attack on the prison which would allow everyone to escape. This event would 进入发射倒计时模式on B.O.M.B.-001. ULYSSES would assess the viral spread, try to gather up the escaped prisoners, once找回其中的90%, launch nuclear missiles to “clean & prevent” any further infection. By the time this happened, Presper had planned to be on, and in full control of, B.O.M.B.-001, and 然后自己修改核弹攻击到的地方 to clean the areas he wanted. Humans of his choosing would wait out the second nuclear holocaust in the Boulder Dome, until the day came where he declared the Earth safe for pure-blood humans once more. The only thing that was a time-consuming factor for his plan was figuring out the launch codes on the satellite. But Presper knew he was more than intelligent enough to eventually figure it out. After all, he was far more intelligent than the monkeys who originally programmed the launch computers on B.O.M.B.-001, or so he thought.[8]