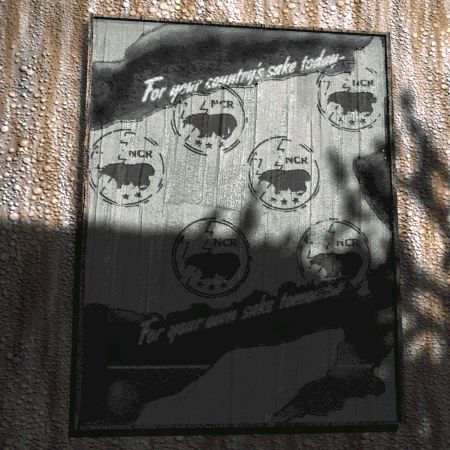 Shady Sands (called the New California Republic, NCR in-game), is the capital of a federation of towns in California of the same name. With a population in the tens of thousands, it is the largest settlement in the Core Region.

The town of New California Republic can be found nineteen squares east and twenty-seven squares south of Arroyo.

The New California Republic was born out of the remnants of the survivors of Vault 15, a sister vault to Vault 13 that opened earlier and released its occupants out onto the wasteland. Abandoning their vault (after scavenging most of what they could from the surviving technology and collapsed lower levels), the former residents of Vault 15 founded the small farming community of Shady Sands, a town midway between Vault 13 and 15. In the 2160's, the community was led by Aradesh.

The daughter of Aradesh, Tandi, eventually rose to the title of president of the sprawling New California Republic. At the time of Fallout 2, Shady Sands has been renamed "New California Republic." The town has since been transformed from a small farming town into the largest civilized population center in the Core Region, made prosperous through trading with other towns. Almost nothing of Shady Sands remains, only a few familiar looking buildings. NCR's main resource are its great brahmin herds, which provide most of the wasteland with as much meat and leather as they require. The brahmin barons and ranchers in NCR (along with the Stockmen's Association) hold a great deal of sway with the caravans and the government.

NCR is divided into four sections.

The Bazaar is the outside section of the city. It is there that the player can get used to the laws of the city (although they are not fully applied outside the city). The Bazaar is predominantly a merchant area: the Buster's Fine Emporium of Armament is a good place to buy heavy weaponry, as well as ammunition. In addition, the player can stop by the Rawhide Saloon for a drink, or Son of Bob's Iguana Bits for some snack. Vortis, the slaver, also operates in this area.

Being naturally the central part of town, NCR Downtown is where the player gets first contact with the NCR culture and lifestyle. Many buildings are displayed around, and the police is a present force. There he/she can find a police station, and cantina, a merchant's union, a hospital, a Hubologists outpost, and the NCR power plant. In addition, NCR Downtown is where the player can buy the map with directions to Vault 13 from Dr. Jubilee, who is located in the city hospital.

The Westin Ranch is Roger Westin's private property. Located west to NCR Downtown, it is a wealthy ranch heavily guarded by local policemen, with three small buildings and the ranch house where Westin lives. In order for the player to enter the property, he/she must have business with Westin, which can be gotten after he/she talks to the NCR Sheriff and asks for "honest work"; another way of getting in is having a low intelligence level, which will make the guard at the entrance feel sorry for the player. Also, there the player can find Saltbeef Bob, a delusional old man who says that Dr. Jubilee has a map to Vault 13.

The Council Hall is where the power of the NCR is concentrated. Two buildings (the Hall of Congress and the Presidential Mansion) are located there, but the Hall of Congress is the main one. It is politically the most important part of the city, and where President Tandi is located. Also, her aide Gunther can be found in this section; he is the one the player must talk to in order to have business with the President. In the middle of the area, a statue dedicated to the Vault Dweller can be found.