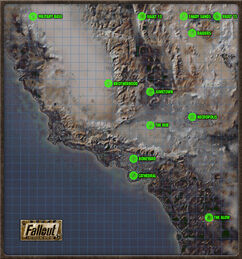 New California is a region of the wasteland that exists within a portion of post-War Southern California. It stretches from Shady Sands to the north[1] to as far south as the Boneyard[2]. In 2186, it becomes the center of the New California Republic[3], one of the largest known factions in the wasteland.

Prior to the Great War and the destruction of the United States, the region of Southern California was populated with the cities of Los Angeles and Bakersfield. It was also known to have four vaults: 12, 13, 15, and the Los Angeles Vault.

When the Great War occurred, Southern California was hit particularly hard. Los Angeles, with its destroyed skyscrapers and skeleton-ridden streets, became known as the Boneyard. In the town of Bakersfield, the people hid within Vault 12 to survive the bombs. However, since the Vault's door failed to close completely, the vault dwellers succumbed to large amounts of radiation and turned into ghouls, giving it its new name, Necropolis. At the same time, the surviving soldiers of Mariposa left their base and formed the Brotherhood of Steel within the Lost Hills bunker.

A little further north, the town of Junktown was built from the ground up using pre-War cars. In 2092, survivors that hid with the Los Angeles Vault came out to found the town of Adytum within the Boneyard[3]. In the nearby ruins, the Blades gang and the Gun Runners formed and, later, the Followers of the Apocalypse migrated in from Dayglow.

In the center of these locations, the Hub was founded in 2093[3], quickly becoming the center of trade for all of New California. With a plutocratic city council and a heavily armed police force, the Hub became home to the three most powerful trading companies in the region: the Crimson Caravans, the Far Go Traders, and the Water Merchants. In 2141, Vault 15 would open[3], releasing four groups: the peaceful citizens of Shady Sands and the raider groups known as the Vipers, Jackals, and Khans.

Unbeknownst to most, the unattended vats of Forced Evolutionary Virus within the Mariposa Military Base began to spawn various mutants. One of those mutated was Richard Grey, becoming known as the Master[3]. Coming up with the belief of the Unity in 2103, the Master discovered a method of using the FEV to turn humans into super mutants and began to develop an army to conquer New California, while also forming the Children of the Cathedral, who worshiped him.

In 2161, Vault 13, the last unopened Vault, suffers mechanical failures and sends out the Vault Dweller to find a replacement for their destroyed water chip. He successfully acquires the water chip within Necropolis' Vault 12, while solving various problems throughout New California, including saving Shady Sands' Tandi. Upon discovering the threat of the Master, the Vault Dweller was sent out again to deal with the threat of the Unity. Meanwhile, the super mutant army attacked and destroyed Necropolis while searching for the Vault Dweller[4]. Eventually, the Vault Dweller tracked down the Master within the Cathedral and Mariposa, destroying both sites and causing the mutant army to disperse.

Thanks to the influence of the Vault Dweller, Aradesh, leader of Shady Sands, chose to open further relations with the rest of New California. The town expanded rapidly and later joined together with Junktown[5], the Hub, Boneyard, Dayglow, and recently formed Maxson[6] to form a higher government, the New California Republic. After the Chosen One settled a problem with the New Khans, the NCR continued to expand and influence the nearby regions of Northern California, Baja, and the Mojave Wasteland.

Prior to the formation of the NCR, the towns of New California were mostly isolated with the only interaction being in the way of trade[7]. While the Hub and Junktown are welcoming to outsiders[8], Shady Sands and Necropolis are distrustful of those they do not know[8][9]. While the people of Adytum are welcoming[10], the security of the town are suspicious of newcomers[11]. The Brotherhood of Steel takes this even further, allowing no outsiders in Lost Hills unless they accomplish a, believed to be, impossible task.

Even in 2161, law does exist. With Shady Sands creating a guard to defend against the Khans, Adytum trusting its safety to the Regulators, and Junktown and the Hub creating police forces to fight the crime within their cities. With the NCR, the state of law has expanded greatly. With the creation of the Army and the Rangers, the NCR has exiled the raiders of New California and policed the cities of the nation. However, loopholes do exist, as shown by the existence of a slave pen right outside the capital's walls.

The most common forms of food are crops and brahmin[12]. Shady Sands is self-sufficient[13] with the other settlements trading with the Hub to get any food they need[14][15]. Adytum was previously fed with its own hydroponic farms, but they ceased functioning by 2161[14]. The Water Merchants of the Hub supply a large quantity of the water needed throughout the region[16]. By 2281, the region continues to grow a great deal of food, but it's estimated that there will be food shortages by approximately 2291 due to growing populations[17]. At the same time, water consumption and neglect have caused most of the lakes in the region to dry up[18].