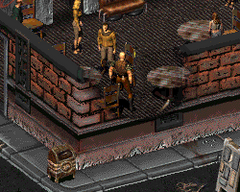 “Well, you see it’s like this - golden geckos and regular geckos are basically the same critter except the golden’s got a big second helping of sheer cussedness... (time passes as you learn the lore of the Gecko)”

Smiley is a gecko trapper in Klamath in 2241.

A filthy middle-aged trapper with torn and bloodstained clothing,[1] Smiley is a popular, jovial fellow with decades of experience in hunting game of all sizes, making him one of the best in his trade. Recently, as his age began to catch up with him, he caught the eye of Ardin Buckner. The feeling was mutual and the two planned to settle down together,[2] but before Smiley could commit to it, he had to follow one promising lead, one that would have explained the origins of the golden gecko.

In search for the origin of the golden geckos he headed northwest of Klamath. He was right to deduce that they had a home that way, for it was there he discovered their nest in the toxic caves.[3] He entered their lair to kill the creatures and take their pelts, however one of them got behind him and almost took his leg off. From there he made his way further into the cave, taking refuge behind the leaking toxic goo waste. This however wasn't as great a deterrent as he thought, as although the geckos didn't like to crawl through the muck (it burns the skin), they did like to consume the toxic waste.[4]

While hiding in a generator room in the back of the caves he realized that the caves were an old, pre-War military storage facility.[5] Forced to survive on whatever he could squeeze out of the place, the wounded trapper hopes for rescue, against all odds.

Once rescued he will be very grateful and reward[6] the Chosen One with the knowledge of how to skin geckos for their pelts.[7] He will also explain all the local lore of the Gecko.[8]