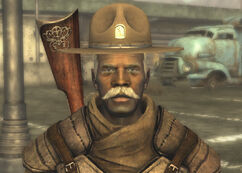 Corporal Sterling is an NCR soldier serving at Camp McCarran in 2281.

There is a cell found within the GECK, above the eastern cliffs of the Colorado River and across the river from Camp Forlorn Hope, named "MalpaisLegionCamp," perhaps alluding to Sterling's capture by the Legion near Malpais.