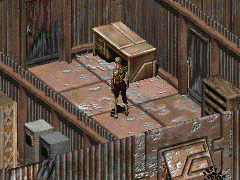 Skeeter is a "ghoul gadgeteer" who serves as a mechanic for Gecko in 2241.

However, he is considered unreliable by the ghouls who administer Gecko's supply locker/storage room, since he once caused a fire, and as such he is typically denied part requisition forms. He is assisted by "Lumpy" John, a human refugee from Vault City who has no visible mutations like the ghouls, but is considered unacceptably mutated by the Citizens in Vault City because of his unusual resistance to radiation.

Skeeter upgrades weapons. A free upgrade can be obtained from him by fetching the 3-Step Plasma transformer.

Skeeter appears only in Fallout 2.