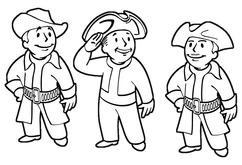 “The Castle garrison have spotted hostiles scouting the perimeter. We should find out what's going on.”— Preston Garvey

Form Ranks is a Minutemen main quest in Fallout 4.

After completing the quest Inside Job and getting Banished from the Institute, talk to Preston Garvey about how to take down the Institute. Preston will state that the Minutemen are not strong enough to take on the Institute. They will need to recruit more settlements in order to have the manpower necessary to stand a chance.