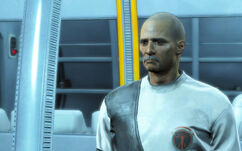 Political Leanings is an Institute repeatable side quest in Fallout 4.

Upon speaking with Justin Ayo in the Institute, he will tell the Sole Survivor that Diamond City's Mayor McDonough is a synth that was put into place to monitor the evolution of the Commonwealth.

Ayo periodically sends someone out to Diamond City to retrieve McDonough's report and asks the Sole Survivor to do this for him. After traveling to Diamond City and finding Mayor McDonough, he'll already have been informed that the player character was on their way and gives them the report. Once the report is retrieved, one will need to travel back to the Institute and give it to Ayo to complete the quest.

Once given the report, Ayo can also be pushed, with a Speech check to give a reward of 100 caps.