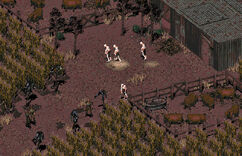 Modoc
Jo
前一任务：
-
后一任务：
Go to the Den and tell Karl it's alright to come back home
Jonny is missing. Find him and bring him home to Balthas
Deliver Slag message to Jo in Modoc

“Please let me apologize for the unpleasant circumstances under which we meet. Normally, the Protectors would have tried to scare you off. Usually rattling chains and some low moaning is enough to scare anybody off[...]"”— Vegeir.

When the Chosen One began the saga of events in Fallout 2, the nearby town of Modoc had already been suffering through several seasons of drought. Agriculture was on the verge of collapse and, if it failed, so, too, would the town. Modoc's mayor, a tough-talking but committed man named Jo, had a solution: a nearby abandoned farm. The farm, however, was its own problem altogether.

Pay No Attention to the Corpse Atop the Stake

Upon arrival, the player finds the farm essentially the way Jo described it: numerous bodies impaled on tall stakes, and pools of blood and bone everywhere. However, players with a decent Perception stat will note that the bodies aren't bodies at all; they're dummies covered in brahmin blood and offal. Someone is trying to pull a fast one.

If the player arrives at the farm at night, not only will they find the staked bodies, but glowing, shambling people are moving about in the fields. Although they look like glowing ones, they're nothing of the sort. It's all more of the ruse.

The only structure on the farm is a tiny tool shed, and it is nearly empty. A few cheap tools and footlockers are on one end of the shed, opposite the door. However, the footlockers are merely bait; the real reason for the shed is the hole leading to the caverns below. A hole covered, conveniently, by the rugs in the room. One step on the rug, and the player takes an express trip to the basement.

Although embarrassing, falling through the shack floor into the cave system below is not painful. Upon arrival, the player is taken before Vegeir, the leader of the group, for explanations and yet another request.

Deciding the Fate of Two Settlements

At this point, the future of both Modoc and the Slags rests in the player's hands and, depending upon the player's actions, can mean mutual success, failure, or outright slaughter.

The high-karma track involves explaining the deception and the reasons for it to Jo, proffering the alliance, and making sure it goes through. This usually involves tracking down Karl. The player will also need to find Karl quickly, as news of his survival will need to be taken back to Jo to avoid him attacking the Slags. Successfully brokering the alliance leads to the flourishing of both settlements.

Neutrality involves the player washing his or her hands of the entire affair and walking away. Things do not go well for Modoc as the drought intensifies, and the Slags stagnate.

To be evil means to encourage Jo to assault the Slags. Jo brings the player along as another hired gun, and the mission is simple: wipe them out. With the Slags destroyed, the farm also withers and dies out, leaving Modoc a doomed town with no means of feeding itself.