“Ruthless. Selfish. Bloodthirsty. Since the day the bombs dropped, Raiders have been the scourge of the wasteland. In Appalachia, Rose is their enigmatic leader. But who is she? And what does she hope to gain, as she watches the carnage from her roost on the Top of the World?”— @Fallout[1]

The raiders of Appalachia were an alliance of ruthless marauders and bandits from across the region. They consisted of five gangs: the Cutthroats, the Diehards, the Blackwater Bandits, the Gourmands and the Trappers. By 2102, the alliance had been dissolved and its members wiped out. As of 2103, new raiders have begun to arrive in Appalachia.[2]

The raider groups of Appalachia were bloodthirsty psychopaths who terrorized the other survivors, taking whatever they wanted from them.[3] They turned out to be expert scavengers, surprisingly ingenious when it came to salvaging old-world technology.[4] Their brutality and ruthlessness was a function of their background. The earliest raider groups were formed in the Savage Divide by the wealthy tourists who were trapped at the ski lodges there by the Great War.[5] At first, the rich and the staff tried to rationally respond, awaiting rescue by government forces, however, within a week the supplies at the resort started to run dry - they were reliant on regular deliveries, after all. In response, the tourists started to form salvage parties, to gather supplies while awaiting rescue, placing their belongings under the care of the resort staff.[6]

The survivors tried to connect with the Responders at Charleston in November, to ask for help and supplies. Overwhelmed with the influx of refugees from all the areas west of the Rockies, the city's leaders had to turn them away. The failure to gather meaningful supplies weakened Harland McClintock, the leader of the survivors elected by popular vote. However, what really twisted the arrogant rich into atrocious raiders was the winter of 2078. Blocked by snowfall and radiation, the food supplies dwindled until they almost completely disappeared and the survivors turned on each other. When the Responders finally sent up an expedition up into the mountains in August 2078, they discovered what was left of the survivors, which terrified even those who witnessed the immediate aftermath of the Great War.[7] David Thorpe offered a way forward that Harland did not, even if it meant stepping on necks to get what they wanted. When the McClintocks tried to hold a trial and exile him for killing two survivors who came to help, they were already in a losing position.[8] After ensuring Harland was out of the way, Thorpe shaped those people into something terrible. They took what they wanted by force and killed anyone that stood in their way.[9]

Under his leadership, the raiders slowly organized into one of the largest organized factions in Appalachia. They split into five gangs: Cutthroats, Trappers, Diehards, Blackwater Bandits, and the Gourmands. The raiders preyed primarily on unaffiliated traders and travelers, traveling through the Savage Divide, and cautiously stealing items they could not obtain by force, for example, from the Appalachian Brotherhood of Steel. By 2082, their sporadic clashes and tepid expansion into the Forest brought them into conflict with Responders in Charleston. The rising star of the Responders was almost extinguished when Rosalynn Jeffries, second-in-command of the Cutthroats and lover of their leader, David Thorpe, was captured in a brutal clash south of the city. Placed in custody and interrogated, Jeffries could not contact Thorpe and was believed dead.[10] Furious, Thorpe ordered an attack on the Summersville Dam, where he used mini nukes stolen by the Blackwater Bandits from the Brotherhood to blow up the dam and flood Charleston on Christmas Eve. In so doing, he also killed Rosalynn, trapped in the jail cells of the Capitol Building.[11]

War with the Order

Although Thorpe gained a temporary advantage over the Responders, in so doing he alienated numerous raiders who still had traces of conscience lingering,[12] and drew the attention of the Order of Mysteries under Shannon Rivers. Rivers spent the winter of 2082/83 reconnoitering raider positions in the mountains and having her pupils intercept Responder radio communications. The challenge was daunting: Raiders had multiple bases, dozens of checkpoints and sniper posts fortifying the region, and their numbers kept steadily growing.[13] The campaign continued and the Order had a flawless performance record for nearly three years, until the first death. Clarissa, a Mistress, was found dead on February 7, 2086.[14] Her death had a profound impact on the organization, leading some of the members to question the total secrecy and isolation that the Headmistress mandated. Although an alliance seemed wise, Rivers ruled any such action out to keep the Order invisible to the raiders.[15]

The raiders were steadily losing the war until Olivia Rivers made a decision to betray her mother and the Order which she had built. She planned to infiltrate the raider organization and take it over, giving her the power to bring order to Appalachia.[16] To do so, Olivia struck a deal with David Thorpe via Brody Torrance - she would sell out the Order of Mysteries in exchange for a blank check.[17] Thorpe agreed to the deal and Olivia delivered him the details of Allison Long's upcoming mission to Summersville in exchange. The ambush on Allison was a success but not without Olivia's personal intervention. Brody Torrance profited from this success by immediately being promoted to lieutenant, assigned quarters at the Black Diamond Lodge, and assigned seven men, all to focus on destroying the Order.[18]

Olivia continued to trade intel on Order operations to the raiders. The Siphon holotape she recovered from Sugar Grove during one of her runs allowed her to put the entire Cryptos mainframe on a single holotape, which she handed over to the raiders at a meet on September 20, 2086.[19] The tape was the jackpot and Thorpe immediately handed it over to his tech specialist for analysis, using the data both to wage a campaign of attrition against the Order and to gain other leads. The final raid against the manor would wait until the raiders had a decisive advantage.[20]

Despite the extensive preparations, the raiders' war against the Order of Mysteries would end in an anticlimax for the victors. In early November, Rachel West caught wind of Olivia's betrayal, resulting in the latter killing all of her former sisters in arms and leaving a message for her mother to meet her at their "special place" in the Savage Divide.[19] Thorpe ordered Brody Torrance to ensure that there were no loose ends.[21] Brody followed Olivia to Seneca Rocks where she fought and killed her mother. When the fight was over, instead of honoring their deal, Brody shot Olivia, putting an end to the Order once and for all.[22]

It seemed that Thorpe's position was unassailable for a time, however, the Enclave's machinations set him up for the fall. By 2087, with Harpers Ferry fallen to the scorchbeasts and the Scorched and the Appalachian Brotherhood of Steel shielding the southern reaches of the Appalachians, the monsters started pushing into the Savage Divide through the Mire. The Palace of the Winding Path was the first to disappear, however, Thorpe made a fatal mistake when he failed to recognize the threat, continuing his parasitic operations. His last mistake was when he decided to imprison Hank Madigan and tried to extort the Responders and the Free States for the Scorched Detection System uplink in late 2096. He paid the ultimate price for his mistake, becoming one of the Scorched when they finally purged the Savage Divide of the raiders.[23] In the spring of 2097, the demoralized, fractured remnants were fleeing in every direction, looking for shelter. None was available.[24]

The raiders were organized into a loose hierarchy based primarily on their power and influence with David Thorpe, whose leadership, charisma, and ruthless cunning allowed him to divide and conquer any challengers while advancing the raider agenda.

The largest of the gangs, camped out in Pleasant Valley and ran by David Thorpe together with his girlfriend, Rosalynn Jeffries. Thorpe, a ruthless and cunning man, deposed Harland McClintock after the survivors at the chalet selected him as the leader, and reorganized them into a potent fighting force. The Cutthroats lasted longer than the other gangs, but they, too, fell when the Scorched started pushing into the Savage Divide, and Thorpe himself was turned into one.

A raider gang operating out of a camp near the Devil's Backbone, the Trappers focused on traps and indirect combat. One of their patented tricks was the use of fresh meat combined with explosives to take out any hounds used by the Responders to try and track them down.[25] The Trappers were led by Walter Griswold and had a pretty good run, until the super mutants started appearing again, courtesy of the Enclave. The gang splintered apart after Walter was dragged away to Huntersville by the super mutants, and the remaining survivors fled the area.

The least aggressive of the raider gangs, the Diehards moved north and occupied the Sunnytop Ski Lanes complex. While other raiders used violence to get their way, the Diehards tried to get by through a combination of theft and intimidation. Their head, Margie McClintock, stipulated that they only attack in self-defense and avoid killing if possible. This led to a rather high attrition rate among her raiders and a lot of doubt in her leadership.[26] However, the Diehards were left alone by the other gangs thanks to their close relations with the cultists at the Palace of the Winding Path and the drugs they could supply that way.[27] However, the Diehards could not outrun karma and eventually unraveled to the same force that wiped out the Palace, with Margie committing suicide by drug overdose shortly before their disappearance.[28] In 2103 a former Diehard named Meg Groberg led the raiders back into Appalachia to The Crater to reestablish their presence in the region.

The most talented thieves in Appalachia organized into one outfit led by Freddie Lang, the Bandits took their name from Blackwater Mine that they made their lair. Perhaps their most notable achievement was sneaking into a Brotherhood of Steel outpost and making off with weapons, ammunition, even mini nukes, forcing the Brotherhood contingent to move on and indirectly providing Thorpe with the means to blow up the Summersville Dam.[29]

They disappeared from Appalachia, not because of moving on, but because of the mine itself. One of the raiders ignored orders from his boss and turned on the mine's automated uranium extractors, which promptly filled the mine with radiation. They traded with Thorpe, giving away the mini nukes for a crate of RadAway in mid-2082. Although this RadAway kept the radiation at bay for a little while, eventually the raiders succumbed to it, becoming ghouls.[30]

Operating out of Bolton Greens, the Gourmands supplemented their diet with human flesh, eventually going strict cannibal as they occupied the Greens, using the automated chefs to prepare their meals out of freshly slain humans. It didn't matter to the Handies whether the meat was animal or not, it all went on into the pan. The Gourmands effectively unraveled when they realized their leader, Morris Stevens, was preying on other Gourmands (finding half of Gregory in their quarters was as unambiguous as it got). They banished him out into the wasteland and took out a contract on his head. Morris and his wife Edie took shelter in the fabled wendigo cave, where he mutated into a literal wendigo.[31][32]

Raiders operate a number of automated vendors, inside train stations such as Sutton Station, Sunnytop Station, Pleasant Valley Station, and the R&G Station. Another vendor bot is located at the Pleasant Valley Ski Resort, inside the building.

Before being wiped out, the Appalachian raiders developed a language of symbols to communicate with fellow raiders and mark places based on their loot or on the threat they might pose. 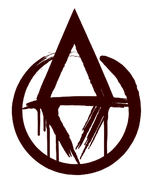 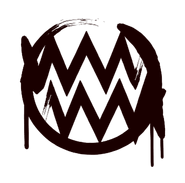 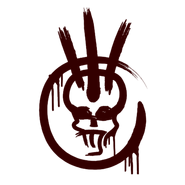 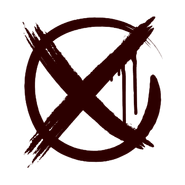 Raider decal (do not attack) 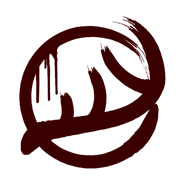 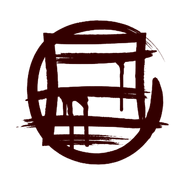 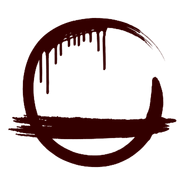 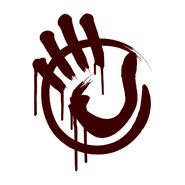 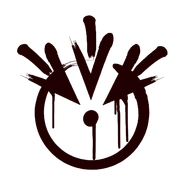 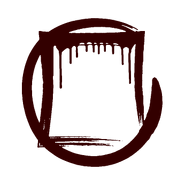 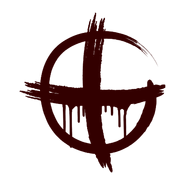 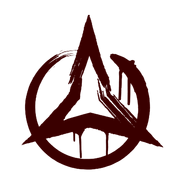