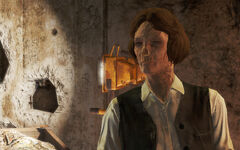 Recruiting Hancock[1] is a miscellaneous quest in Fallout 4.

After completing The Big Dig through siding with Bobbi No-Nose, John Hancock will intercept the Sole Survivor in front of the store area of Goodneighbor. Hancock is unhappy with the Survivor killing his friend and bodyguard Fahrenheit, and demands 1,000 caps compensation, which can be reduced to 750, 500 and 200 caps successively with increasingly harder Speech checks, and tasks the Sole Survivor with confronting and killing Bobbi to retrieve those caps. Bobbi can be found at the Hawthorne Estate, where apart from Bobbi herself there will be two initially passive turrets. There the player character will have a conversation with three potential outcomes, all of which will progress the quest:

If left alive, Bobbi will allow the Sole Survivor to take the few items scattered around the estate (it will no longer be considered stealing).

Upon returning to Goodneighbor, Hancock will be waiting near the exit door on the second floor of the Old State House. Regardless of the action taken or dialogue options chosen, Hancock will respect the Sole Survivor's decisions and will not request the previously arranged payment. He'll remark that he's not the same as he had been years ago and that he needs to get back on the road again, to hone his edge.

After making a speech from State House balcony to the crowd of Goodneighbor, Hancock becomes available as a companion.