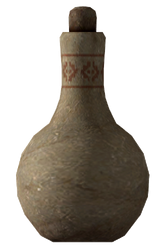 Antivenom is a consumable item in Fallout: New Vegas.

Antivenom is modern medicine's answer to the tribal antidote by combining nightstalker blood and radscorpion glands which acts as a cure against poison. It is effective against any poison produced by animal (Night stalker) or arthropod (Bark scorpion, Radscorpion, Cazador) and fixes the "blur" side effect instantly. It is a purely medicinal consumable with no side effects.

This item can be crafted with a Survival skill of 40 upwards and the necessary components:

Datura antivenom - a version of the antivenom appearing in the add-on Honest Hearts.