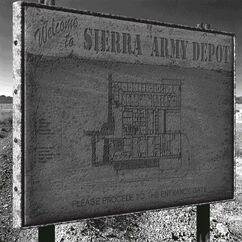 “Yeah, the only survivor said that there were some kind of super gun turrets guarding the entrance. Wiped out most of his boys.”— Orville Wright

Find a way into the Sierra Army Base is a Fallout 2 side quest.

Orville Wright wants an edge on the other New Reno families. He tells the Chosen One of an abandoned military base. This is not, however, the only way to get the Sierra Army Depot location on the world map, as it can be found by digging up the grave of Sam Pritchard on the northwest side of Golgotha with a Perception of 7 or more when digging the grave in order to find his map to the base.

Even if every Salvatore gang member in the bar was killed, Orville Wright will advise that there are other Salvatore Made Men and Enforcers outside of New Reno and they are a threat to the Wrights and still wants the extra firepower.

Upon arriving at the Sierra Army Depot, note the bodies lying where they fell. Join them or take out the automated turrets, it may not be possible to target them while completely outside their range, even with a sniper rifle due to their range. The Auto-cannon can be destroyed by targeting "the gun servo", a critical hit can cripple the turret gun, making it harmless, allowing the Chosen One to get closer and destroy it.

There is yet another way to get in, however. Note how one of the bodies of them is slightly farther than the rest. Move in a diagonal from the right of the guard structure to the grouping of trees to the left of the center turret; this will allow one to make it through without triggering combat. Of course, having a high sneak skill will work too.

A third option - with a sniper rifle, enter and exit combat while moving around at a safe distance from one of the turrets (If they're outlined in yellow, then the player character is out of range; if they're outlined in red, however, the player character is within range.) Find a spot where the turret can be shot with decent accuracy, then move one step away and it won't be able to counter-attack.

There is loot on the ground as well as on the bodies, including a sniper rifle (near the opened fence, south-west) if one is required.

To the northwest, there's a bunker with three traps outside, a trap on the door, and a trap on one of the ammunition crates inside, the bigger crate has a howitzer shell. Use the howitzer shell on the howitzer in the building to the right (which has three mines in front of the door, one in the gap by the truck, and one near the barrels and tires), creating an access to the depot. Anything by the Depot entrance doors at this time will take damage.

Once inside one can report back to Orville Wright. Regardless, the quest is crossed off in the PipBoy, so returning to Orville will only provide the quest reward.

Should one enter the fenced-in area in the northeast corner they will take electrical damage. In a small room at the bottom of a manhole is a switch that puts the base on backup power (50% normal power). Consider before using it that this has the effect of reducing the illumination in the Depot, and turns the yellow impassable forcefields in the base into red ones which damage anything passing through them. Alternatively, as with all yellow forcefields, Repair can be used on them to pass safely.

After entering the base there is a password note ([TCHAIKOVSKY]) in the first desk on the left. Typing it in the computer terminal disables all forcefields in Level 1. In the locked room located to the left of the entrance the "Sierra Depot Evac. Notice." can be found. In the lab located to the right of the entrance contains bio med gel (needed for the quest) on the ground and in the lockers: yellow memory module, Dixon's eye (use it to open elevator) and a medical holodisk.

Robots will not attack if the alarm is not triggered (don't fail too many times to deactivate force fields.) 200 XP can be earned for disabling the repair bay computer, on the left side of the level. There is a cookie in the room to the right of the laser beam. Eating the cookie increases one's maximum Action Points by 1 for 15 minutes.

Again, robots will not attack if the alarm is not triggered. Triggering the alarm causes extra robots to appear from their previously hidden location inside nearby walls. The computer on this level is an AI known as Skynet. Skynet has a strong desire to leave the base and explore. To facilitate this, reactivate a robobrain by retrieving a brain from the medical storage facility on level 4. After activating the Robobrain, have it join the Chosen One's party, its stats being mainly affected by the brain retrieved. It's often worth coming back to the base to complete this quest at a later time. The room with the incomplete Robobrain also contains another jar of Bio med gel.

Again, robots will not attack if the alarm is not triggered. On this level, one can retrieve a brain to host Skynet by using a computer in a room to the northwest, the one with a window showing the cryogenic containers. The better the player character's science and medical skills, the better the brain retrieved. There are 4 brains, with the chimpanzee brain being the worst and most useless. While using the computer to retrieve a brain, a cadaver of a soldier can also be retrieved and reanimated, resulting in a conversation. The organ extractor on the room to the left can also be used, which has another computer; using this computer while a companion is in the organ extractor allows the retrieval of their brain for use in Skynet.

The password [TCHAIKOVSKY] is the surname of Russian composer Pyotr Ilyich Tchaikovsky.