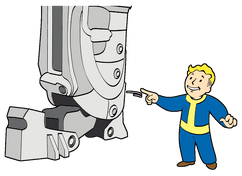 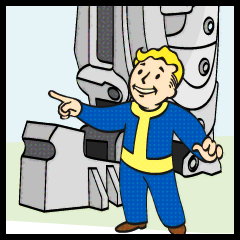 Ad Victoriam is a Brotherhood of Steel main quest and an achievement/trophy in Fallout 4.

After destroying the Railroad and getting the beryllium agitator, speak to Proctor Ingram at the Boston Airport. She will now allow the Sole Survivor to power up Liberty Prime. Go to the top of the gantry and plug the agitator into Liberty Prime. After that, return to Ingram and press the button. Liberty Prime will activate, leave the gantry and start walking towards the C.I.T. ruins, with the Brotherhood of Steel personnel saluting it as it walks away.

Liberty Prime will annihilate everything thrown at it, using its powerful eye laser as well as nukes, even effortlessly crushing the behemoths that will attack the robot near Ticonderoga. Do note however that, unlike in Take it Back!, Liberty Prime will mostly use its Mark 28 bombs rather than its eye laser; thus, it is advised to stand back from Prime's enemies and let it destroy them, as you may get caught in the blast radius of one of Prime's bombs, which will deal a significant amount of damage if it does not kill you. Since Prime is entirely immune to his own weaponry and well aware of the fact, he has no qualms about using his nukes at point-blank range. During your trip to the Institute, one will be followed by a small group of Brotherhood of Steel knights, comprised of Knight Lucia and a few unnamed Brotherhood of Steel members, as well as a Vertibird. If Duty or Dishonor has been completed by agreeing to keep quiet about Initiate Clarke, then he and Knight-Sergeant Gavil will accompany the Sole Survivor in place of the unnamed knights. Also, if Paladin Brandis has been recruited back to the brotherhood, he will fight there as well.

Eventually, Prime reaches the CIT ruins, which are guarded by a large group of synths. At this point, Elder Maxson, armed with his unique weapon, as well as more Brotherhood of Steel personnel, will join in the fight. Liberty Prime will analyze the area and detect the Institute, and proceed to use his weaponry to create an access. While Prime uses his eye laser and nukes to create an access, he will be unable to attack the synths, meaning you will have to deal with them, although Maxson's gatling laser often makes short work of them. After some time, Prime will throw nukes at the front of the ruins, creating a hole that will allow the Brotherhood of Steel to gain direct access to the Institute. Jump down the hole to enter the Institute, completing this quest and starting the next one, The Nuclear Option.

Ad Victoriam is an accusative construct in Latin; ad being a preposition that is paired with an accusative, ad[1] having the meaning 'toward', and victoriam being the accusative form of the noun Victoria, ae[2], a first declension feminine noun meaning 'victory', translating to: 'toward victory'. Brotherhood of Steel members in Fallout 4 often use this quote, during combat or to celebrate a victory.