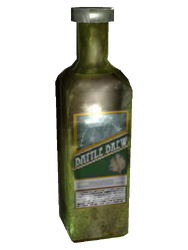 Battle Brew was created by Dr. Mori, a Big MT research scientist at the X-13 research facility.[1] After an argument with Dr. Calis, Mori was forced to move the supply to a storage room in the facility.[2]

Battle Brew is a potent concoction made from vodka, mutant cave fungus, and Salient Green. The mixture grants no Charisma bonus but provides healing and greater resistance to injury. In essence, Battle Brew acts as a combination of Med-X and stimpaks. In addition, consuming this applies a separate effect named "Red Mist," which lasts for 20 seconds and grants +40 action points and an additional +1 Strength. Contrary to the (longer) Strength bonus, this one stacks with other alcoholic beverages.