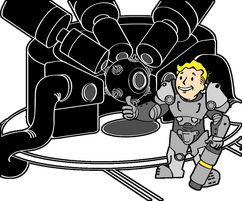 “If the Institute finds out the Agitator's there, they'll do everything they can to keep it out of our hands.”— Ingram

Spoils of War is a Brotherhood of Steel main quest in Fallout 4.

As the Vertibird closes in on the Mass Fusion roof, a contingent of synths will open fire. Take out as many as possible with the Vertibird's minigun. Make use of the various explosive containers spread across the roof. After a period of time, the pilot informs the player character that the Vertibird has sustained a dangerous amount of damage and needs to leave.

At this point, the player character is given a prompt to disembark from the Vertibird and land on the roof. Clear out any remaining synths and head inside the structure.

Proceed to the upper level and take the Mass Fusion executive lab password and ID from a desk. Access the marked executive research lab terminal-- either with the password or by hacking if the password was left on the desk-- and read the file from 07-30-77 to determine the location of the agitator.

If the player character did not grab the ID before the previous step, leave the terminal room and take it from the desk on the left to complete this objective. The ID is needed to use the elevator that leads into the building.

Proceed to the reactor level

Next, the player character must reach the lobby either by reactivating the power and continuing to ride the elevator down or by dropping down a hole in the floor and traversing to the bottom. If the player character chooses the latter, a number of synths will attack them along the way; choosing the former avoids most of these encounters (unless otherwise sought after the fact).

The Strength bobblehead is located in the upcoming area.

Once in the lobby, take care of the nearby synths and head to the left to find the marked elevator. Swipe the ID card to open the doors and ride down to the reactor level. After exiting the elevator, head to the right and down the stairs to the control room.

Removal of the beryllium agitator will trigger the security system, which consists of five ceiling-mounted turrets, a sentry bot, two Assaultrons and two Protectrons. If the player character cannot hack Master terminals, they may want to manually take out as many robots as they can access before going into the reactor chamber. Otherwise, they can hack the reactor security control terminal in the main control room. This terminal has the option to disable security, but it fails; instead, use it to open the security doors. Go into the now-open room that contains the inactive sentry bot and access the facilities terminal inside to disable the security system.

If the player character approaches Ingram, she will ask whether they have enough radiation protection on hand. Any answer given will lead to her giving the player character two Rad-Xs. Ingram indicates that there are probably some items lying around that can also help. There are three hazmat suits in the area - two regular, one damaged. One is in the locker room, on a locker's shelf. The other regular suit is on top of a safe in the office under the stairs next to the decontamination airlock. The damaged suit is in a drawer in front of the window of the airlock. Power armor is also a sufficient method of protection if the player character happens to be wearing it.

Walk up the scaffolding to the top of the room. Press the marked interlock release button to the right of the gray orb with blue lights in order to expose the agitator.

Take the agitator from its housing, which triggers the security system if it is still enabled.

Eliminate reactor level security
If the security system was triggered, destroy all of the aforementioned active robots to complete this objective.

Go back down the scaffolding and out of the reactor room. Press the button for the airlock and wait for the decontamination. Return to the elevator and take it back up to the lobby.

As the elevator ascends, another explosion occurs. The Institute has sent reinforcements, but so has the Brotherhood of Steel. Ingram will tell the player character to leave with the agitator while she stays behind. The player character can either heed her advice and run for the exit, or stay and help finish off the synths.

(Optional) Assist Brotherhood forces in the lobby
Staying until all of the synths are defeated will complete this objective.

Leave the building and travel back to Boston Airport.

Once at the airport, speak to Ingram at the base of Liberty Prime to complete the quest. If Tactical Thinking is already finished, Ad Victoriam will begin. Otherwise, Ingram will take the beryllium agitator and store it until Ad Victoriam starts.