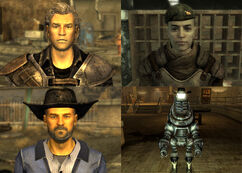 “A little bit ago the convicts there staged a coup, killed the guards that weren't able to escape, and have been ransacking the area since then.”— Lieutenant Hayes

My Kind of Town is a side quest in Fallout: New Vegas.

After the Courier enters the side of Primm taken over by escaped convicts, the can go to the Vikki and Vance Casino and talk to Johnson Nash, who will tell the player character that Deputy Beagle is being held hostage and needs to be rescued, beginning the quest, or one can go directly to Deputy Beagle within the Bison Steve Hotel and proceed along one of several courses outlined below.

The player character must now fight and/or sneak their way to Deputy Beagle, who is tied up and being held hostage in the kitchen of the Bison Steve Hotel. Six convicts and their leader inhabit the main floor of the hotel. One or two of them will often be found near the entrance, with the others staying nearer to the large dining hall at the back. With a 25 Lockpick skill or the maintenance key from the storage room in the entrance area one can reach Beagle in the kitchen without having to travel past the large group of convicts in the dining hall.

If one agrees to release Beagle, the following may happen:

After exiting the hotel one can talk to Deputy Beagle or, if Beagle has died, to Johnson Nash, in order to advance the quest. Either will ask the player character to find a new town sheriff for Primm. There are several options for whom you decide to bring to town as lawmaker:

The NCR is an option to take control of Primm. To request assistance from them, speak with Lieutenant Hayes in the NCR camp on the western edge of town. He will refer the player character to Major Knight of the Mojave Outpost.

The Mojave Outpost is to the southwest of Primm, along the road and up a hill. On the way to the outpost, one can take the route following the road, in which the player character will encounter two convicts walking towards the Nipton Road reststop. As the player character passes Nevada Highway Patrol station, they may be attacked by some of the Jackal raiders that have claimed the station as a base. One can also detour across country on the west side of the road, which results in encounters with a few feral ghouls and radscorpions, or on the east side, through the giant ants and bark scorpions.

With a Barter skill of 20, one can convince Major Knight to assign an additional squad to Primm, to help ensure the trade route will function normally. If he cannot be convinced, the player character can do some work for the outpost in order to convince Knight to send some reinforcements to the town.

Upon returning to Hayes, he will state that the squad is ready and the NCR is ready to accept jurisdiction over Primm, with Sergeant McGee as the new sheriff. The town will finally be safe and begin receiving more supplies from the NCR. Primm's residents will become NCR citizens and begin paying taxes and living under martial law. Nash, who will be found at his store counter, will be selling more guns, ammunition, and aid items at a 25% markup due to the NCR taxes.

Mr. New Vegas will also mention the new mayor in his news segment.

The NCR Correctional Facility is to the north of Primm, on the east side of a mountain that is adjacent to the highway. The facility is controlled by the Powder Gangers, with Dawes as their gatekeeper. There are at least two ways to gain entrance:

After getting into the Facility by whatever means, talk to Meyers, and tell him that Primm needs a new sheriff. He will tell the player character that he will need a pardon from the NCR in order to serve as sheriff of the town without any problems. In the mean time, he will be waiting near the town's entrance.

The pardon can be granted by Major Knight at the Mojave Outpost by doing one of the following:

Upon receiving the pardon, one must speak with Meyers (Just inside of Primm) before he will begin working as Sheriff. Since the town is back to normal, Johnson Nash will resume business in his store. With the lack of NCR taxation, Nash will sell goods at 75% lower prices and buy goods for more caps.

Speak to Johnson Nash or Deputy Beagle and ask if Primm Slim could be the sheriff. They will say that Slim can be sheriff, so long as one can reprogram him. One will then be prompted to speak to Primm Slim. There will be two options on reprogramming him:

Speaking with Deputy Beagle (if he is alive) after reprogramming Primm Slim will complete the quest and the citizens will leave the Vikki and Vance Casino. In subsequent conversations with Deputy Beagle, he conveys his dissatisfaction with having a robot sheriff.

Upon appointing any of the three possible sheriffs, any remaining convicts within the Bison Steve Hotel will be killed instantly. The Courier can safely return to the hotel and loot their bodies. The other remaining convicts outside (such as the roller coaster) will still be alive.

"My Kind of Town (Chicago Is)" is a popular song composed by Jimmy Van Heusen, with lyrics by Sammy Cahn. It was originally part of the musical score for Robin and the 7 Hoods, a 1964 musical film starring several members of the Rat Pack. Frank Sinatra regularly performed the song live, and included the song on four of his records.

A cut speech exists with in the game's files, meant to be delivered by Meyers to a small group of inmates close to him, should you recruit him to be Primm's new Sheriff. In it, Meyers calls upon the other inmates to join him in forming a new police force in Primm, calling them "honorable and looking for redemption" despite not having "experience with law enforcement... at least not on the enforcement side."