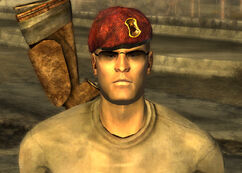 “You don't come out of a tour of duty without regrets. It's best just not to think about it.”— Craig Boone

I Forgot to Remember to Forget is a companion quest in Fallout: New Vegas.

The Courier must have Boone with them as a companion to activate this quest. In order to access the necessary dialogue options, the player character must have spoken to Manny Vargas in Novac or Bitter-Root in Camp McCarran about his tour of duty in the NCR and Bitter Springs. In order to trigger the quest, one must accumulate at least 5 "history" points with Boone.

Note that these "history points" can only be earned while Boone is in their party, although he need not be by the Courier's side (they can have him wait elsewhere). If all of the following have been completed before recruiting Boone, it will be impossible to accumulate the required history points without using console commands See note for details.

The +2 history points will provide some dialogue which the Courier can respond to, which will affect Boone's opinion of them when the actual quest begins. Sometimes Boone will make comments while the events are happening or just completed and sometimes he will not comment. Each time history points are accumulated, one can choose the companion option to "talk to" Boone. As his history/trust with the Courier improves additional dialogue options about his past and Bitter Springs will open up. Depending on dialogue choices, one can eventually persuade Boone to consider returning to Bitter Springs. If that final dialogue option is unlocked, the conversation will come to a close (no more dialogue options) and Boone will say it is a bad idea. Waiting next to Boone for a few minutes will result in him approaching the Courier and saying he has reconsidered what they have said, changed his mind, and will ask if they can go to Bitter Springs together. Agreeing to do so will initiate the quest to begin.

Some of Boone comments:

The attack on Bitter Springs

In order for Boone to initiate a dialogue about Bitter Springs, the Courier must have both gained Boone's loyalty and talked to either Manny Vargas in Novac, Bitter-Root at Camp McCarran or Captain Gilles (only after the quest Climb Ev'ry Mountain) about the Bitter Springs Massacre. After a Speech check of 30 or better is passed the Courier may suggest going back to Bitter Springs. Boone will initially refuse, but will approach the Courier after a period of time about revisiting Bitter Springs.

Once arriving at Bitter Springs, Boone asks to go to Coyote Tail Ridge, where he was stationed and tells the Courier exactly what happened during the massacre there. He then asks the Courier if they don't mind staying overnight. If the Courier says yes, the screen will fade out and fade back in, with Boone saying that a Legion raiding party is on the way. It largely consists of recruits, but they can be tough to defeat, especially if trying to avoid casualties. Some tougher units will be mingled with the later waves.

The quest is considered complete once all three waves are dead. Boone will typically immediately talk to the Courier once the last enemy is dead, but not always. The Courier does not gain NCR Fame until he speaks to them, so the Courier may put on (or take off) faction armor at that point, depending on whether the Courier wants to accept the fame adjustment. At the end of the conversation, his armor is upgraded depending on the last answer. Although both armors are only cosmetically different, this dialogue choice actually influences Boone's ending.

The name of this quest is a reference to the song "I Forgot to Remember to Forget" sung by Elvis Presley in 1955.