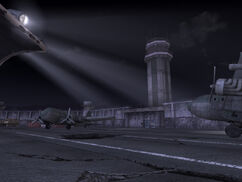 “Yeah. On top of everything else, I can't send a patrol on a bathroom break without them being ambushed by someone that heard they were coming. So somebody's getting the word out.”— Colonel James Hsu

I Put a Spell on You is a side quest in Fallout: New Vegas.

Camp McCarran has been compromised, and an agent is feeding information to Caesar's Legion about NCR troop movements. Find out who this agent is.

At some point, or upon asking James Hsu about problems at Camp McCarran, the Courier will be asked to speak with Captain Ronald Curtis, who is located on the ground floor of the Camp McCarran terminal building to the west of the escalators. He will then ask the player character to speak to Carrie Boyd or Contreras (Although he says that Contreras is not "above" suspicion). Map markers will send the player character to Corporal Sterling, Contreras, and Boyd to ask around about suspicious activity. Contreras will refer the player character to Boyd but Sterling will provide valuable information about the spy. Speaking to Boyd will complete this part of the quest. Ask her about break-ins. She will say that there have been break-ins at the control tower every night. Ask her for an access key. IMPORTANT: Do not inform Curtis about this lead if one wants to save the monorail. If done so, he will still go to the tower but he will not talk on the radio, and there will be no way of knowing about his plans to destroy the monorail until speaking to Hsu after confronting Curtis (or pickpocketing the codes). Being spotted by Curtis waiting outside the radio tower will also have the same effect. He will approach the player character. Subsequently, even if he is followed into the tower, he will not talk over the radio and will ambush one instead.

Go out to the control tower. The most direct route is to go out the back door between the escalators on the ground floor. Move back by one of the planes to the right (the plane closest to the wall is a good place), and wait until about 12:30 a.m.

At about 12:55 A.M., Curtis can be seen walking towards the tower. However, one can also wait until around 2:50 a.m. and enter the building, he will already be in the tower talking on the radio. If one does choose to wait outside by the planes at 12:55 A.M., the player character must remain hidden, otherwise he will confront the player character and ask why they are there. If one ends the dialogue successfully, he will then walk back into the base and one will need to wait until the next day (unless a Speech check of 50 is passed to keep him on course after a brief return to the terminal). If Curtis starts shooting at the player character, run outside to the tarmac, then run back to the tower without firing back on him. Enter the tower and exit, Curtis will no longer be aggressive. It is possible that Curtis may not appear on the tarmac and will already be inside the tower. If the lights are on, he is already there. If he is not seen by 3 A.M., enter the tower and stay hidden as per the next instructions.

If one remains hidden from Curtis, he will walk into the tower. Follow him inside, and stay hidden at the bottom of the stairs while listening to him talking on the radio. The quest will update and tell one to disarm the bomb on the monorail. With a Explosives skill of 35 or Science skill of 45, one can choose to go directly to the monorail, which is accessed through a door in the Northeast corner, second floor, of the main terminal building. The bomb is located inside the train car, at the air vent, next to the inside door. Otherwise, the Activation Code will need to be pickpocketed off of Curtis for a loss of Karma. Curtis can also be confronted, in which case he will become hostile, one can kill him without loss of Karma or rep. If one kills him without confronting him, Colonel Hsu will become hostile upon reporting Curtis' death to him without giving the option for dialogue. After Curtis becomes hostile, he is fair game to kill. Then loot the Activation Code from his body. (If one does not see him head into the tower, go into the tower at 2 A.M. and he should be heard in a conversation over the radio.)

Once the bomb is defused, if Curtis is still alive, one may wish to return to the control tower and finish him off for the "history point" for Boone's I Forgot to Remember to Forget Companion quest. Curtis otherwise will commit suicide after being reported to Hsu. Return to Hsu, who will reward the player character with some caps and a reputation boost. Upon killing Curtis (before reporting to Hsu), the NCR guards on the tarmac may turn hostile (killing him silently should help avoid this problem), so run quickly back to the terminal. There should not be a problem collecting the reward and XP from Hsu despite the hostile guards outside.

The quest can also completed by killing Curtis in the tower before hearing the radio conversation.Upon reporting it back to Hsu, he will be surprised and state that Curtis could not be the spy as he was the leader of the investigation. After this, it will be revealed that there is a bomb on the train, the explosion of which cannot be prevented. After the train explodes, report it back to Hsu, and then the quest ends, with one gaining caps and Fame, but a lesser XP reward of 350. With the monorail destroyed, one will need a very good reputation with the NCR to complete "No, Not Much."

After receiving the quest from Colonel Hsu, talk to Captain Curtis and choose the option "I know who you are, and I work for the Legion, too." This option will be available after talking with Martina Groesbeck during The Finger of Suspicion. After talking with Curtis, follow the map marker to the garbage can in front of the ticket counter, and take everything inside it, which includes monorail sabotage plans and the explosive charge. If the player character does not take everything, they will not be able to frame Davey Crenshaw.

After collecting all the items in the garbage can, talk to Hsu and offer to lead the investigation about the information leak. Then go to the monorail. If the player character's reputation is high enough they can just walk past the soldiers. If not, then there is a change of guards at 9am and 6pm, which should provide a short time to sneak to the monorail without getting any problems with the guards. Alternatively, the player character can put on an NCR uniform and the guards will let them pass without attacking. Now enter the monorail, turn left, and there is a vent at the end which one can activate to plant the explosive charge. The quest tells the player character to leave the monorail and watch it depart. Do not leave until it explodes, as it may stop the quest from being completed.

Back inside the building, stay on the upper level and follow the map marker to Davey Crenshaw's footlocker. Put Abraxo cleaner, conductor, fission battery, monorail sabotage plans and wonderglue into the footlocker. Head downstairs and out through the back doors. Follow the map marker to Crenshaw, who can be killed in a special way through dialogue (requires a 40 Sneak skill check.) Head back inside and speak to Colonel Hsu. The first option, telling him about the evidence, will reward 100 caps, as will the second option using speech (both are repeatable due to a bug.) The third option does not provide anything.