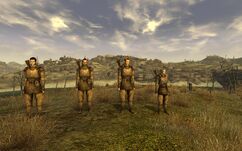 “The squad leader's got some promise, kid named Mags, but as for the rest... I don't see much hope.”— Sgt. McCredie

Flags of Our Foul-Ups is a side quest in Fallout: New Vegas.

Start the quest by talking to Sgt. McCredie.

Talk to O'Hanrahan about talking to the whole troop about improving teamwork and strengthening their relationships. The Courier will need to pass a Speech check of 40 to convince Poindexter, Mags and Razz. The Courier will gain experience for each party member that is convinced.

The Courier will receive 40 XP for each of the members convinced and then 200 XP once complete (Total XP = 320) and positive fame with the NCR. Additionally, the team looks to be working well together.

The player character will receive 200 XP and additional (31+43+55)*2=258 XP (with 10% gain) while teaching the squad and positive fame with the NCR. Additionally, the team looks to be working well together.

Suggest to Poindexter that the system could be cheated. He'll give the advice to hack the terminal in the House Lodge so that the squad doesn't have to do any work.

There are two hackable computers. The one in the lobby requires no Science skill, but it must be accessed when nobody is looking. The other one needs a Science skill of 75 but can be accessed at any time.

NCR infamy will be increased and Karma will be lost when the player character alters the records, but upon completion of the quest, 200 XP and positive fame with NCR will be received.

Listen to Razz, who will have the squad take Psycho. The player character must talk to Jack in Red Rock Canyon to get a suspicious package.

Completing this quest gives 200 XP and positive fame with the NCR. Providing the misfits with drugs has no effect on Karma.