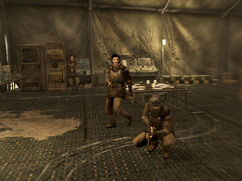 “If you're so eager to see Camp Forlorn Hope fall, why don't you go attack it all by yourself? Well?”— Dead Sea

We Are Legion is a side quest in Fallout: New Vegas.

Note: Many of these officers are involved in the quest Restoring Hope, and completing this quest will cause the opposite quest to fail. Other quests that begin in or involve the camp can be completed if they are finished first.

Upon talking to Dead Sea in the Nelson barracks, one can say that they are going to slaughter Camp Forlorn Hope. He will respond, saying that "A vow without action is breath across the lips, nothing more." This starts the quest. To complete this quest, the Courier must travel to Camp Forlorn Hope, and kill the four named officers there. Joseph Polatli, Carl Mayes, Reyes, and Alex Richards. These are the only four individuals that must be killed, the rest can be spared and the quest continues as normal. After the four are killed, the Courier returns to Dead Sea, and he will give them the Liberator as a reward for the slaughter.

The title of this quest is a play on words, evoking Mark 5:9 of the New Testament, in which Jesus of Nazareth conducts an exorcism. At face value, the phrase "we are Legion" means that you are working with the Legion, whose numbers are vast. However, its more esoteric meaning is written in the King James Version of the Bible: "And he asked him, What is thy name? And he answered, saying, My name is Legion: for we are many."