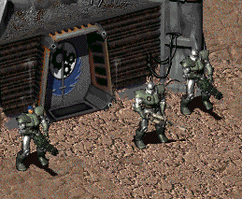 “It was in my best interest to leave town for a while. I journeyed to this Brotherhood they would have the knowledge I sought, I tried to join them. They required me to go on a quest before they would let me in.”— Fallout 2 manual

When first approaching the entrance to the Brotherhood of Steel bunker at Lost Hills, Cabbot will greet the Vault Dweller in an unusual manner. If asked about joining the Brotherhood, he explains that anyone who wants to join the Brotherhood must first complete a quest, an order from high elder Maxson. The quest involves retrieving an ancient Brotherhood disk from the "ancient order."

The surface and the underground facility at the Glow are both highly irradiated, so anti-radiation chems are a necessity:

Rope is also necessary to get inside:

Once all the necessary supplies have been gathered, travel to the Glow. One needs to take two Rad-X as soon as they arrive to gain 100% resistance to radiation since the whole area is heavily irradiated. They then need to use the rope on the metal beam protruding into the crater on the left side to descend down into the facility.