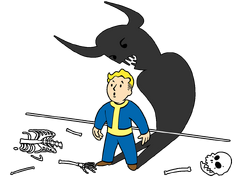 The Devil's Due is a side quest in Fallout 4.

On the exterior west side of the Museum of Witchcraft is a body; on it is Private Hart's holotape. Upon listening to the holotape it will be clear that Hart and her crew were running from something and took cover in the museum. Enter the museum via the cellar door a few feet away from the body. While in the museum there is growling and some body parts dropping from holes in the ceiling periodically as one makes their way through. Head up to the first floor. In the room behind the closed door there is a wandering deathclaw (level dependent). Kill or sneak past the deathclaw and look around the floor in the rear bathroom to find Sergeant Lee's holotape (required to advance the quest) by his corpse. Around the body are some cracked deathclaw eggs and the pristine deathclaw egg required to advance the quest.

One then has the option to continue the delivery of the egg to Wellingham outside the Colonial Taphouse in Diamond City, where they will be awarded 200 caps (plus an additional 100 with every persuade approval) and, after an additional dialogue choice, they will receive the Wellingham's recipe note which teaches the recipe Deathclaw Wellingham. Although not noted at the time, it also adds an additional recipe for tasty deathclaw omelette.

Alternatively, one can return the egg to the nest west of Parsons Creamery where a friendly deathclaw will appear and one can find a deathclaw gauntlet next to the nest. Finally, it is possible to take the gauntlet without returning the egg, allowing one to sell the egg to Wellingham normally. The friendly deathclaw will turn hostile if one tries to leave the area without returning the egg. One can still fast travel while the deathclaw is still friendly. Simply grab the gauntlet and fast travel to Diamond City without leaving the immediate area which would make the deathclaw hostile and prevent fast traveling.

After the original questline for Salem was cut, Liam Collins, one of the newest quest designers on the development team at the time, was given control of the Salem quest. He was determined to keep something at the Museum of Witchcraft before he and other designers came up with the concept of a Deathclaw being trapped in a building.[1]

The friendly deathclaw in its nest

A possible glowing version of the friendly deathclaw