Breakheart Banks is a location in the Commonwealth in 2287.

Breakheart Banks is a small family farm on the banks of the Saugus River. Prior to the Sole Survivor's visit to this farm, it was overrun by super mutants. This is evidenced by the corpses of the farmers on the first floor and the smashed automatic turret just outside the farmhouse.

The approach to Breakheart Banks can be tricky because the house has a commanding view of the area to the west and south. There is also a fortification garrisoned by a single super mutant and some Mutant hounds.

Inside the shack there are a mattress, a weapons workbench, a steamer trunk, as well as a fridge stocked with corn cobs and mole rat meat. A cooking station can be used next to the corn field.

Breakheart Banks appears only in Fallout 4.

When trying to clear out the location for the Brotherhood of Steel side quest, Cleansing the Commonwealth: Breakheart Banks, the quest may become stuck and fail to complete.[已验证] 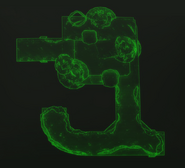