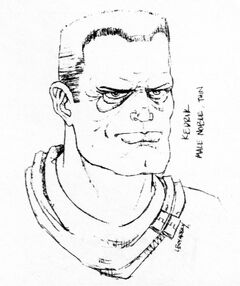 “I must confess feeling a bit . . . disappointed in you. But these things happen. You will remember this is confidential. Good day.”

Decker is the true power in the Hub, and little happens thereof that he is not aware. He is outwardly calm, even placid, and quite patient; he is also quite ruthless. He possesses great intelligence and speaks in an eloquent way, contrasting with his brutish appearance. He seeks to control the entire water distribution business, which would establish him as the de facto ruler of New California, via the Far Go Traders, a merchant company he controls from behind the scenes.

He is wary of threats to his position, including the Children of the Cathedral, whose attractive preaching and aggressive expansion endangers his operations. Likewise, he also looks for a way to control the Hub police, whose head, Justin Greene, is less corruptible than his father.

He also presides over the Friendly Lending Company, a loanshark operation managed by Lorenzo Giovanni, which was accused by the Hub police of extortion.

Decker appears only in Fallout as a talking head. He is voiced by Keith David. He also is mentioned in the Fallout Bible. 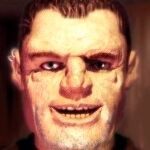