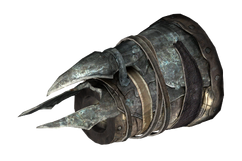 The Cram Opener is a unique weapon in Fallout: New Vegas.

它可以攻击370次 from full condition before breaking.