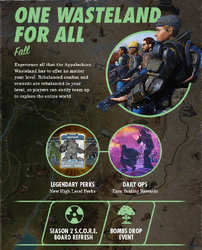 “Experience all that the Appalachian Wasteland has to offer no matter your level. Rebalanced combat and rewards scale to your level so players at different levels can easily team up to experience the entire world together---from the Toxic Valley to the Cranberry Bog.”— fallout.bethesda.net

One Wasteland For All is the fifth major update for Fallout 76. It focuses heavily on a game-wide balance pass, as well as introducing the legendary perks and Daily Ops features. It was followed by Steel Dawn.

Following up on Russell Dorsey and his mission to fortify the ATLAS Observatory, One Wasteland For All continues to add to the world of Appalachia, introducing Vernon Dodge and his own mission to assist the returning Brotherhood First Expeditionary Force.

Armor Ace debuted alongside this update, as the second season. This season brought a new scoreboard, playing as Armor Ace and the Power Patrol in their march of freedom against the dreaded Subjugator and their army of Red Viper minions. The aim of this adventure is to help lead the charge against the oppressive Vipers and fight for liberty as one progresses throughout the season.

The season's scoreboard was formerly referred to as "the March Of Freedom" until the Public Test Server update on August 21, 2020, where it was changed to "Armor Ace" and later changed to "Scoreboard."