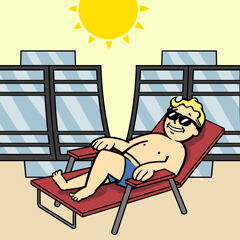 “They asked me how well I understood theoretical physics. I said I had a theoretical degree in physics. They said 'welcome aboard!'”— Fantastic

That Lucky Old Sun is a side quest in Fallout: New Vegas. It is also an achievement on the Xbox 360 and PC and a bronze trophy on the PlayStation 3.

At the entrance on the south side of HELIOS One there is an NCR officer named Lt. Haggerty, who is the head of the NCR detachment guarding the plant. The Courier can ask her for access to the plant. She is inclined to turn them away, however one can get her to change her mind with one of the following options:

Once the player character has convinced her, she tells them to talk to the "idiot wearing sunglasses."

Optionally, one can sneak in through a back door with a Very Easy lock (player loses Karma). From there the player character should find the idiot with the sunglasses, Fantastic and talk to him to begin the quest.

To get the Big Book of Science or other quest rewards from Ignacio Rivas, you must speak to him and make sure not to select "I'm with the NCR" when asked which group you fight for or belong to, nor select "War" when asked if you're a maker of war or peace. Any other option available will make him trust you. Then, if he trusts you, talking to him further and telling him that "the NCR asked [the Courier] to increase the power plant's output" will lead to Ignacio asking the Courier to divert the power to the full region instead of only to the NCR. (Ignacio will then also provide the eastern reflector control terminal password.) If you did these steps, then at the end of the quest, when you divert the power, you will get the "Go talk to Ignacio" objective and get one of his possible rewards depending on where you diverted the power to; the Big Book of Science being the reward for choosing to divert the power to the "full region," as he asked.

Failing to gain Ignacio's trust will immediately prevent you from receiving any rewards from him, no matter what other speech options you select or actions you do later in that quest. Likewise, even if you gained his trust, you have to mention that "the NCR asked [the Courier] to increase the power plant's output" before diverting the power in order for the "Go talk to Ignacio" objective to appear and be able to receive any rewards from him.

In the back of the plant is a science lab of sorts, where Fantastic and Ignacio Rivas are trying to get the output of the plant up. Fantastic is a transparent fraud who clearly has no idea what he's doing. Rivas is an actual scientist, who is really working for the Followers of the Apocalypse, a group which worries that the plant is not merely a power plant, but a pre-War super weapon.

Fantastic and Rivas explain that to get the plant running, the mirror control systems need to be connected to the mainframe and then the mirrors retargeted from the mainframe terminal in the plant itself. The two mirror control terminals require a password. Each man holds a password for one of the two mirror control terminals. Fantastic will give his up easily enough. Note that Fantastic's password is not in his inventory; it must either be obtained via dialogue or found in the same room as Rivas' password in a footlocker on the second floor.

Rivas will only give the player character his password if they gain his trust by professing to be peaceful (or at least not trying to get involved, both available if the Courier states they only work for themselves), states that they want what he wants (must know Rivas is with the Followers, requiring a Speech check or Confirmed Bachelor perk), or if the player character claims to be with the Brotherhood of Steel. This may only be done on the first conversation. One can also pickpocket the password from him, or a duplicate password can be found in a second floor office, lying on a desk.

Both terminals are inside small shacks on the outer perimeter of the mirror field. The west mirror control terminal requires the password obtained from Fantastic. The east one can be unlocked with the password obtained from Ignacio Rivas or from the office of the main building on the second floor by the room with the giant hole in the floor (take an immediate right after entering through the main door), or it can be hacked with 75 Science.

The western shack has multiple traps, including three frag mines, a rigged shotgun with a tripwire and two bear traps. Once the traps have been disarmed or avoided, the terminal just needs to be activated and "Reset Mainframe Connection" selected.

This second terminal is protected by several NCR guard dogs, but they aren't much of a problem. Killing them has no impact on NCR reputation and won't turn anyone nearby hostile. Activate it just like the first, by selecting "Reset Mainframe Connection."

Get to the mainframe

The Courier then enters the tower via a door near the base. Just past the door and a short hallway is an area with three hostile turrets and hostile robots. In a room just across from the entrance is an easy locked terminal that controls the turrets. This same room also has four armed land mines.

One must then wind through the rest of the building, destroying many robots along the way, until arriving at an elevator in the basement that takes the player character to the observation level. Along the way is a Poseidon Energy employee ID card. There are two lying on the floor in a room adjacent to the room with the elevator. There is a door in the elevator room with an Average lock that leads to the room with the IDs, or one can go back through a room filled with protectrons and down a hall to reach the back door of the room. Combat with the aforementioned protectrons can be avoided as they are contained in shielded charging stations until activated by a laser trip-wire at the base of the door to the room containing them. The tripwire requires a Repair skill of 85 or Science skill of 65 to disarm.

The observation level contains not much more than the mainframe itself and stairs to reach the exit door to the outer viewing deck. The mainframe is not working, as it doesn't have enough power because the attached generator is malfunctioning. The player character can either repair the generator (which is connected to the mainframe by a steaming hose) with a piece of scrap metal and 35 Repair, or can go up the stairs to find a maintenance bot called PYTHON, which can be activated with a Poseidon Energy employee ID card or with 45 Science skill. Once activated, the robot will repair the mainframe.

The terminal on the mainframe contains some notes the player character has probably already seen on previous terminals in the building and an option Configure Power Grid. Selecting it reveals 5 options:

Once one of the five options has been selected, the terminal returns to the main menu. A new option comes up at this point, Arm ARCHIMEDES Plant Defense System. If it is activated, then the Archimedes I plant defense system will be triggered as soon as one activates the reflector control panel on the outside of the tower. Doing so will call down a laser strike on the area around the plant (unless power option 5 was selected), killing all the NCR personnel in the area. This result will earn the Courier massive infamy gain with the NCR and no rewards from either Fantastic or Ignacio Rivas, even if the power is diverted to their preferred location.

Until the choices are locked in by activating the reflector control panel, the status of the Archimedes I defense system can be changed and the options for where the power goes can be changed.

Time to flip the switch

Once the Courier has chosen the final power grid disposition and whether to activate Archimedes I, the final step is to go up the stairs and through the door to the outside of the tower. The reflector control panel is down a spiral ramp to the left. It can only be activated between 9 am and 3 pm. Once the control panel is activated, one of three things will happen: