Lucky is a unique .357 Magnum revolver in Fallout: New Vegas.

Like most unique weapons, weapon modifications cannot be used on Lucky. However, it comes with the long barrel modification already added. It uses the least amount of AP of any revolver using only 17 AP. Furthermore, it is considered an improved holdout weapon and can be concealed and taken into weapon-free locations as long as one's Sneak skill is 50 or greater.

幸运手枪可以发射1120发标准.357子弹, the equivalent of 187 reloads, from full condition before breaking. Template:Durability table

Lucky, as with the .357 Magnum revolver, is based on the Colt Single Action Army, with a few other guns used as a reference.[1] 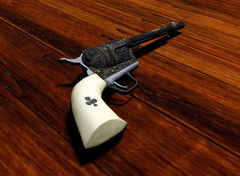