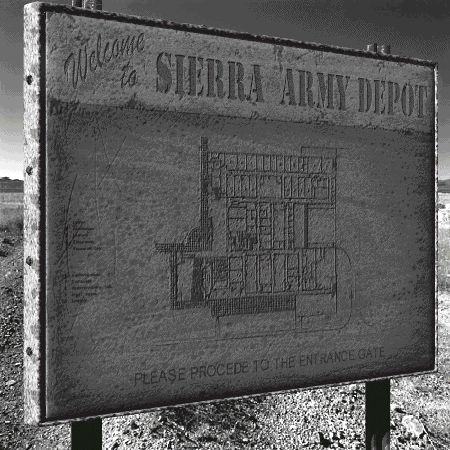 Find a way into the Sierra Army Base

山嶺軍事基地位於新里若的西北方，步行大概兩三天左右。Its existence is largely forgotten by many of the residents of the wastes, and may have remained lost were it not for its accidental rediscovery by a group of explorers. These explorers then reported its location 給萊特家族。

Constructed in 1942, at the height of World War II, 山嶺軍事基地(SAD)負責存儲各類軍火和軍需品。This weaponry would be used to defend the United States should Japan make a daring attack on the west coast. SAD was meant to work in concert with nearby military installations and units to ensure adequate, unbroken supply lines in the event of an invasion.

In 2050, the military, recognizing the need for improved equipment and weapons, refitted and renovated Sierra Army Depot from a leftover munitions bunker into a state-of-the-art research facility. Its activities were classified, and a Level 5 military clearance was required even to enter the base perimeter. 裏頭的科學家開始研究和開發自動機械，並負責測試生物武器和常規武器。With the collapse of the UN in 2052, weapons inspections essentially grounded to a halt. The military embraced this new freedom and opened up a biowarfare development branch in Sierra Army Depot. An artificial intelligence, named Skynet, was installed at SAD to aid the researchers and handle some security functions. In 2071, Skynet achieved self-awareness, but its limited menu of responsibilities prevented it from exercising any control over the base as a whole. SAD continued in this capacity during the outbreak of war with China in 2066.

As the war with the Chinese entered its eleventh year, the combined United States and Canadian militaries were beginning to suffer from a lack of trained personnel. Sierra Army Depot, so far from the front lines, was seen as a waste of human resources; its trained logistics, research, and military personnel could be better utilized in other facilities, or at the front. Thus, in 2077, SAD again changed missions. Much of the equipment stored at SAD was left in place, and automated defenses were established to keep the military property safe. Automatic turrets armed with miniguns were erected around the perimeter, programmed to kill intruders on sight. Mines were planted in strategic locations above ground to deter looters who might somehow bypass or overcome the turret-based defenses.

Sierra Army Depot was given less than one year to move its inventory into storage and properly secure itself. The rushed pace of the preparations led to accidents. Even the base Commanding Officer, General Clifton, was injured alongside one of his subordinates while securing the base. As Corporal Dixon armed an attack mine on SAD's surface level, the mine prematurely detonated. Both men received severe shrapnel wounds, and both the corporal and the general suffered grievously damaged eyes. Although the medical staff was optimistic that allowing the eyes to regenerate in Bio Med Gel, an experimental pharmaceutical preparation developed by the researchers at SAD, so hasty was the evacuation that the eyes were left behind. By October 23, 2077, Sierra Army Depot was evacuated. The base staff sealed the front blast doors, armed the turrets, and cleared the perimeter. Sierra Army Depot was left forgotten and alone for one hundred and sixty-four years.

Wright's job to open and loot Sierra Army Depot is a dangerous proposition. The perimeter is guarded by a number of defensive turrets, each armed with a pair of miniguns. Managing to fight or sneak past these turrets brings one to another problem: the blast door. After being sealed for 164 years, the doors will never open again - at least not as intended. The only way to open the doors is to blow them apart. Using a howitzer locked in a topside storage shed and locating its ammunition is the only way to open the base.

Inside, Sierra Army Depot's security is still working, despite the nearly two centuries that have passed. The interior of the base crawls with floating eyebots and sentry robots, and none are pleasantly-disposed to intruders. Finding a way to bypass or deactivate these robots should be an intruder's first priority.

Transportation between Sierra's four levels is accomplished via elevator, but these elevators are security-locked by a retinal scanner.

If someone is able to penetrate Sierra Army Depot's perimeter and circumvent its substantial security setup, a cornucopia of destructive devices waits for the taking. Firearms of almost all descriptions are stored in SAD's vaults, along with mountains of ammunition. Medical supplies and other goods are also kept in storage lockers and safes.

Sierra Army Depot is broken up into four levels, plus its exterior.

The surface facilities of the Sierra Army Depot are extensive, and the base itself well protected. Automated sentry turrets maintain the perimeter, secured behind a double chain link fence. Topside hangars and warehouses store ordnance and equipment left from before the war, that couldn't be taken by the evacuating soldiers with them, much of it decayed and corroded.

The main entrance visited in Fallout 2, apart from the structure leading to the underground sections of the base, also had an explosive munitions storage next to it (identical design to the Lost Hills exterior shell), the base's power generators, a maintenance depot and, of course, several automated gun turrets.

The first level of the base, at ground level, houses personnel facilities. Entry-point security controls the single entry into the base, while the rest of the level holds barracks (still well stocked and quite possibly the first set of combat armor the Chosen One finds), a gym with a unique punching bag that grants +5% to your Unarmed skill, and the infirmary with some medical supplies.

The primary storage warehouse of Sierra Army Depot, Level 2 is half-filled with boxes. This level contains the bulk of the Depot's stores, as well as the quartermaster's offices. Level 2 is also home to the armory, a high-security vault protected by force fields, shock-plate floors, and a small army of security robots.

One of two maximum-security levels, Level 3 is home to the robotics division, as well as the base AI, Skynet. An experimental robotics lab is on this level, and it still holds a half-completed robobrain. Level 3 also holds the base CO's quarters.

The deepest level of Sierra Army Depot, and also the one under the highest security restrictions, holds the biological research facilities and their associated storage systems. Little more than a series of prison cells adjacent to a surgical suite and a cryogenics storage facility, Bio Storage holds Sierra Army Depot's most sinister secrets.

What's kept in cryogenic suspension? Brains and other body parts (most long since turned to soup), Private Dobbs (an experiment in the biorestorative properties of the Bio Med Gel) and viruses: Anthrax, Black Plague (Strain 238), Small Pox (Strain 1025), Ebola and the Hantavirus (Strain 304).

There is a real Sierra Army Depot that exists in northeastern California, just west of the Nevada border, in Herlong, California and was established in 1942. It is a Supply (ammunition and food supplies) and Logistics base (the equipment to get them to the soldiers).