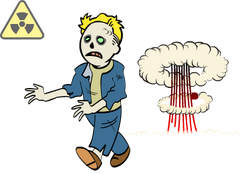 Ghoulish is a perk in Fallout 4 and Fallout 76.

“Sure, you're still human - on the outside! Inside, though, you're seemingly part Ghoul, which doesn't have a downside, except that the perk doesn't function away from radiation. This negates any Rad-X you may need to take (allowing you to sell it instead), and you can venture into the Glowing Sea in just your skivvies if you wish. Simply reference locations in this guide's Map chapter that mention radiation (especially severe) and you have an additional "recharge" point.”— Fallout 4 Vault Dweller's Survival Guide description

This perk functions by healing a multiplier of any rad poisoning received. At rank 1, 50% of rad poison received is healed as health; at rank 2, 100%; at rank 3, 150%; and at rank 4, the radiation level will reduce slowly. This does not provide a constant regeneration effect based on current radiation poisoning (as the similarly-worded Fallout: New Vegas perk Rad Child did).

This has the ramification that this perk has a negative synergy with rad resistance. The more rad resistance one has, the less rad poisoning received, which reduces how much health is restored.

“Sure, you're still human - on the outside!”

Ghoulish is a perk in the Nuclear Winter battle royale mode. It requires 9 SPECIAL points to equip.

Synergizes extremely well with the perks Radicool, and Overly Generous. It also works well with the mutations Healing Factor, Adrenal Reaction, and to a lesser degree Unstable Isotope.