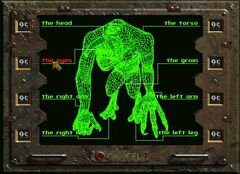 The Vault Dweller needs to kill the deathclaw and speak with the dying mutant, who will give them the mutant transmissions holodisk. Taking it back to the Far Go Traders completes the quest.

Low intelligence makes it harder to obtain and complete this quest. If one has low Intelligence, Mentats will be needed.