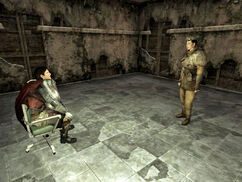 “I hope the Legion burns your wretched body at the stake when they conquer this place. Nothing I could tell you would do anything to stop that.”— Silus

Silus Treatment[1] (or McCarran: POW in the G.E.C.K.) is an unmarked quest in Fallout: New Vegas.

Silus, a captured Legion Centurion, is being held captive in Camp McCarran, with the NCR attempting to interrogate him. So far he has refused to give up any useful information and his interrogator, Lieutenant Carrie Boyd is looking for help.

The player character can speak to Lt. Boyd about getting the centurion to talk, such as using a truth drug, insulting him, or simply beating him senseless. Boyd reveals that her hands are tied since the torture of prisoners is frowned upon in the NCR.

With a reputation of Accepted or higher with the NCR, Lt. Boyd will allow one to go in and deal with Silus. The player character will go in unarmed, unless their Sneak skill is high enough to bring in holdout weapons.

The Courier can either break Silus to get information for the NCR, or help Silus escape.

There are two ways of getting Silus to talk - violently or through persuasion. Keep in mind that using a method of non-violence yields more caps and XP.

Once Silus has given up the information, or is killed in the process, one can no longer interact with him, and will need to talk to Lt. Boyd in order to complete the quest.

Warning: Completing the quest this way would lock up Lt. Boyd's dialogue, preventing any other quests involving her from being completed. Therefore it is advised to complete all other quests involving Lt. Boyd should the player character wish to help Silus escape. See Bugs section on Boyd's page for affected quests.

If the player character has already been invited to Caesar's camp at The Fort or has a positive reputation with the Legion, they have the option to tell Silus this, gaining his trust. Silus will ask the player chracter to retrieve his silenced .22 pistol from the locker in the next room. He then propose to stage a fight with the player character to avoid suspicion. Hit him until his HP drops below 50 (2/3 of his full HP). At this point Silus will stop being hostile and Lt. Boyd will come in. She asks one to step outside and precedes to have a brief conversation with Silus. Steal the pistol from the locker and go inside again once requested, Lt. Boyd will confiscate all weapons except the pistol. The quest itself will be completed once one hands over the weapon to Silus.

He then fakes being unconscious so one can get out without being suspected. Lt. Boyd will come back in and say it looks like he is "all tuckered out," and tell the player character to leave for the day so she can get someone to clean up the mess. On the way out, she instructs Cpl. Hornsby to the job. Once the Corporal is inside the room, Silus will kill the Corporal and dress in his clothes, then walk out of the terminal building undetected by the NCR soldiers.