Play sound
Underground Troubles.ogg
“You are in a dark, musty temple. The shadows seem to play tricks with your eyes, and you can hear the faint sound of movement.”— Fallout 2 in-game description

The Temple of Trials is a pre-War structure just outside the tribal village of Arroyo.

The Temple of Trials was built on the ruins of an older pre-War building, likely a church or museum. The carved head at the entrance and some of the carvings/wall decorations on the three sub-levels were done by the Arroyo inhabitants.[1][2]

In 2210 the Vault Dweller's daughter takes her mystic test, a key ingredient of which is several pots worth of hallucinogenic plants from Hakunin's garden. She runs the gauntlet in the Temple of Trials, using her charm to pass most of the tests after her handgun jams (and is ruined) on the first level. She offers numerous criticisms of the test, resulting in many revisions.[5]

In 2241 like his mother few decades earlier, the Chosen One descended into the dark, musty temple and completed the mystic test.[6][7]

The Temple of Trials requires the Chosen One to use a variety of their skills to complete.

The temple is infested with giant ants and radscorpions, and contains a few treasures including healing powder, an antidote and a spear, though the player character already has one. Getting through the temple, as its name implies, requires the usage of several of the player character's skills:

In the temple's final room is the tribesman Cameron, who challenges the Chosen One to a battle as their final challenge. However, bear in mind that he can be bypassed in other ways depending on the player character's skills:

When the temple is completed, the Chosen One will earn 300 XP and emerge outside clothed in the familiar vault jumpsuit, ready to start the next quest.

Though many fans of the series didn't like being forced through a tutorial section each time they started a new game, the game's developers have stated it was a decision forced on them by Interplay to have a compulsory tutorial section.[8]

The Temple of Trials is the first area of Fallout 2, and was designed as a tutorial location. Also is mentioned in the Fallout Bible.

The structures in the pit in the passage section like the spiked tower and the stone face come from Planescape: Torment by Black Isle Studios. 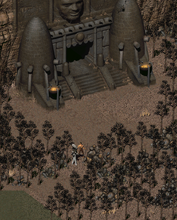