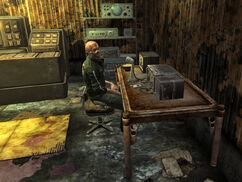 “Maybe I'm not as tough as I used to be, but my brains can make up for that, and my hands are still quick enough. It's time to put the guns back on.”— Raul Tejada

Raul Tejada, the ghoul handyman found captive at Black Mountain, must be the Courier's active companion when the player character initiates dialogue with Ranger Andy in Novac, Corporal Sterling in Camp McCarran (or Camp Forlorn Hope) and Loyal at Nellis Air Force Base. There is no set order to which non-player character should be approached first, but Corporal Sterling must be spoken to until his dialogue tree has been exhausted. At the end of each interaction, Raul will start a conversation with the Courier that revolves around both his observation of the characters and anecdotes about his history.

The Courier must travel to Nellis Air Force Base and initiate a conversation with Loyal, who can typically be found in either his own house, the hangar with the mess hall, or the hangar housing the bomber. After ending the conversation with Loyal, Raul will initiate a dialogue concerning his life during and before the Great War. The choices made will influence which way Raul decides to proceed at the end of the quest, ultimately affecting the outcome. The Courier has an opportunity to hear part of Raul's story but may skip this portion of the dialogue at no penalty.

The Courier must then travel to either Camp McCarran or Camp Forlorn Hope depending on the completion status of the quest Three-Card Bounty. They then must speak with Corporal Sterling, a 1st Recon NCR sniper stationed with the rest of his squad at Camp McCarran, defending the region against fiends. If the bounties have all already been turned in to Major Dhatri during the quest "Three-Card Bounty", his squad will have been reassigned to Camp Forlorn Hope. After initiating and ending the conversation with Sterling, Raul will initiate a dialogue similar to the one held after speaking to Loyal at Nellis Air Force Base.

After concluding this conversation, talk to Ranger Andy in Novac with Raul present. The key topics are what he does in Novac ("What do you do here?") and what happened to his leg ("Did you do something to your leg?" or "What happened?") Raul must hear these answers, so repeating dialogue that has already been heard may be necessary. Learning the takedown move is not necessary, but doesn't hurt. After this, leave the building and wait a few seconds for Raul to run up and talk. Raul will initiate a dialogue concerning the Courier's opinion of Ranger Andy's place as a crippled, older man in a harsh world. This is the final conversation wherein he ties the stories of the three men the player character has met thus far to his own story. He will decide to either return to his gunslinging vaquero ways or relegate himself to a quieter life of machine (and armament) maintenance. The decision at which he will arrive is influenced entirely by the Courier's dialogue responses during the progression of this quest. However, he may be swayed to the other alternative with a Speech skill of 66.

If the Courier convinces Raul to return to the ways of his gunslinging past, then, after completing the final dialogue, Raul will receive the Old Vaquero perk, increasing his rate of fire with revolvers and lever-action rifles by 33%. Raul's outfit will change to the vaquero outfit, and he will continue to provide the Regular Maintenance perk, which reduces the rate of equipment degradation by 50%.

If the Courier convinces Raul not to return to the way of the vaquero, but to contribute in other ways, then Raul's outfit will change to the Armored Petró-Chico outfit, and the Regular Maintenance perk will be replaced by the Full Maintenance perk, which reduces the rate of equipment degradation by 75%.