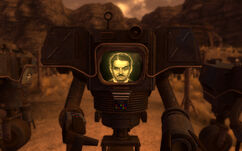 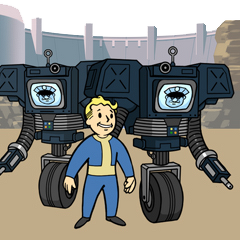 Complete All or Nothing
15

“I knew you'd make it. Resourceful as always.”— Mr. House

All or Nothing is an achievement/trophy and final main quest in Fallout: New Vegas if the Courier chooses to side with Mr. House.

So much work and so many calculations have been brought together at this moment where Mr. House proves to the Mojave that the New Vegas Strip is his, and his alone.

The Courier will spawn at Hoover Dam where immediately NCR Rangers will be fighting the Great Khans (if the Courier did not make them join them in the quest "Oh My Papa") and Caesar's Legion. The tower that must be entered will be the third one on the right. The Courier will see two NCR heavy troopers who will turn hostile if the override is planted, but they can be lied to with a Speech check of 75, allowing the override to be used without having any of the NCR soldiers turning hostile, which is easier for the escape. Once the Courier has uploaded the override, they should head left until they find the door to the main power plant, where just outside there will be an electrical switch to turn on the power for the Securitron army. The Courier should then head back in, find the key to the exit door and go back to the dam where only Legion and Securitrons remain and head east towards Legate's camp. Securitrons will be helping the Courier fight their way to the camp.

Once at the Legate's Camp, the player character must either kill the Legate and all enemies from Caesar's Legion or convince the Legate to retreat with a Speech of 100 with the choice "This battle is decided, that's why I am here." or a Barter of 100 by saying "You could take the West. *Holding* it is another matter." Instead of having to use Speech to fight him alone, the Courier now just says "Worth the gamble - now for the hard way."

Once they are done with Legate's Camp, the Courier must head back towards the gate where they must deal with General Lee Oliver and the NCR army. They can either kill Oliver and his men or convince him to surrender the dam with a Speech of 100 (House's forces are now much stronger than the NCR forces), Science of 100 (House can run the dam better than NCR), or a Barter of 100 (House agrees to protect Caravan routes and enforce fair trade practices). After dealing with Oliver, Mr. House will roll up in a Securitron Mk I, tell them Oliver and Kimball's likely fates, and end the quest and game.