Spore carriers are creatures that inhabit the Mojave Wasteland, as well as Zion Canyon and Big MT in 2281.

22号避难所的居民很不幸的成为了Beauveria mordicana的牺牲品，部分试图逃离这一灾难的居民则进一步将其带到了外面的废土上，连锡安峡谷都未曾幸免，这种蔓延开来的诡异生物成了至今都令人头疼的一大麻烦。It seems that the spread of the green fungus happens over time, as the doctor who first performed an autopsy noticed nothing wrong externally with the first infected victim. 在解剖時发现肺部已经完全被一种未曾见过的真菌感染，explaining the carrier's nasty coughs (noted both in the Vault 22 and the Zion terminal entries) before they succumbed to the fungus.

Walking past unexplored vegetation can result in an unpleasant scare. Spore carriers are also known for sneaking up on their victim. 不过范围伤害的武器使它们减血时，屏幕上出现的生命值显示会提示你附近有一个潜伏者，例如火焰喷射器或手榴彈。

当入侵者靠近时它们会突然蹦出来and will let off a growl in a similar manner to that of a feral ghoul, but with greater ferocity.

普通的孢子携带者。They hide in vegetation and attack anyone tripping over them.

Runts are the smallest and weakest of the spore carrier family. However, they are still quite fast and may overwhelm an unaware, low leveled character. Also, a runt's spore burst is equally as damaging as a regular variant's.

Savages are encountered rarely, but are essentially a more dangerous form of spore carrier brutes. A savage's spore burst is equal to that of the regular version.

只在锡安公园里出现。They are stronger than any of the other spore carriers, and are often found around spore plants.

A spore carrier hiding within some flowers in Vault 22 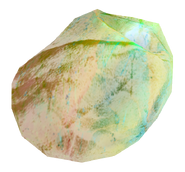