West Tek research center is a location in the Savage Divide region of Appalachia in 2102.

The West Tek research center was founded in August 2075 in order to focus on Greenhouse Initiative, the last extension of the Pan-Immunity Virion project after Forced Evolutionary Virus experiments were spun off from the initiative. The project focused on applying new mutations to create edible plants and vegetation that could greatly increase food production and combat the shortages that led to the food riots rocking the country.[1] The company used Huntersville as a testing ground, after West Tek and the government saved it through a rural development grant. The added commerce and traffic from the research center was an added boon,[2] leading to an economic boom in the small town.[3]

West Tek employees made for poor conversation partners, clamming up or ignoring the townsfolk when they tried to befriend them - national security being no joke - but Huntersville didn't mind, especially when West Tek money started flowing to the local farmers in exchange for testing rights for the PVP-modified crops.[4] The money flow suddenly stopped in February 2076, just as the Greenhouse Initiative was shuttered and PVP assets were transferred to the Forced Evolutionary Virus initiative. The change voided most of the contracts at the research center, with Dr. Wilfred Dumont, head of research, scrambling to find a solution for the now-jobless researchers.[5]

While the Californian facility continued cautious experiments with FEV, gradually progressing through vertebrates to create a reliable strain of the virus, the Appalachian branch of the company was ordered to begin human experimentation in order to push FEV to its practical limits, in what was dubbed the Super Mutant program. Due to the virulent nature of the virus and its unpredictability, the facility's objective was to identify and isolate viable FEV strains through a variety of methods. The most important of these was the introduction of one of the FEV strains to the water supply of Huntersville, to observe the effects of long-term low-level exposure. The experiment began in February 2076, leading to an outbreak of what seemed like a rare strain of flu at first.[6] The village was isolated and put under company guard, with any test subjects that attempted to leave the area hunted down and eliminated. Anyone who reached out to West Tek for help was isolated in the research center for further observation and study.[7]

By August, the denizens of Huntersville were isolated in their homes by West Tek researchers, with armed guards in full hazmat gear deployed to keep them contained.[8] This proved to be insufficient, necessitating military intervention. In November, the 12th Mountain Division was deployed to the town to enforce the quarantine, citing concerns about a possible pandemic. The hazmat-equipped soldiers augmented the security while West Tek researchers continued their experiments on the population,[9] even as the mutating humans started to turn violent around September.[8] Although the soldiers found West Tek authority to be detestable, at best, they followed orders and isolated the town with roadblocks and a secure perimeter.[10] With the exception of Sergeant Jake Bianchi, who attempted to blow the whistle on the human experiments taking place at Huntersville in early November and was promptly court-martialed and replaced with the much-more pliable Orlando Garrett, the quarantine was successful.[11][12]

Experiments continued at West Tek, attempting to isolate an FEV strain that could create sustainable mutations. While the Californian branch was relocated to the Mariposa Military Base to focus on perfecting the mutation process and create super soldiers, the Appalachian facility continued to focus on pushing the limits of FEV, testing a variety of strains. The one on January 13, 2077, coming the closest to a sustainable form, despite its expiration within 13 minutes of release.[13] Further attempts produced a variety of horrors, including a subject whose organic tissues were replaced with various forms of retinal tissue on April 30,[14] one killed 12 days into the mutation by its canines piercing the medulla oblongata on July 12,[15] and a nightmare-inducing result that was biologically stable, but in traumatic pain resulting from the hyperactive nervous system that resulted in it commuting suicide immediately after being transferred to a holding cell on September 5.[16] Beside experiments, the facility's personnel also started work on a neutralizing agent for FEV in May.[17] Intense experiments with a variety of compounds eventually produced a working sample in June, capable of rendering FEV completely inert. To provide a ripcord in case of an emergency, the center cultivated thousands of gallons to neutralize the FEV stored in tanks on-site.[18]

October was far more productive in terms of successful mutations. Experimental strains FEVS-006443 producing what would eventually become the snallygaster on October 14, with the researchers planning to observe and reintroduce the monstrosity to Huntersville if it was able to cohabitate with a standard mutated human - with a partner, no less.[19] The experiment on October 23, the day of the Great War, created a massive, headless creature that was sedated and transported off-site. The nuclear war interrupted the process and allowed it to escape into the wilds, creating the Grafton Monster.[20] The staff of the research center was taken by surprise, but the facility survived, together with its staff. Although the technicians considered bolting, they remained behind for a week while their superiors attempted to make contact with headquarters and failing that, with the US Army units at Huntersville. After six days passed with no sign from either the brass or their supervisors, the technicians dumped the neutralizing agent into the vats on October 30, 2077, verified that it was rendered inert, and abandoned the facility.[21]

The facility was left to the elements until it was rediscovered around June 2080 by Enclave scouts seeking for a way to inflate the DEFCON rating in Appalachia, to allow Thomas Eckhart to seize control of the nuclear missile systems and continue the war against China. Although the FEV was rendered inert, the facility contained enough leftover data and systems to allow the Enclave to breed super mutants and unleash them on Appalachia.[22][23] By 2102, both the center and Huntersville became major strongholds of the super mutants, complete with the usual decorations: Hanging meat sacks, improvised fortifications, and the like.[24] Super mutants will even comment on the West Tek research center being their birthplace when attacking Vault 76 residents that trespass into the facility and alert them to their presence.

The facility is quite expansive, nestled in a secluded area surrounded by rocks. The primary mutant encampment is in the front, with a cooking station next to an abattoir and a holding cell for humans, ringed by a number of towers. However, the elevated hills surrounding the area offer a commanding view and excellent sniping opportunities. Around the back is the rear entrance to the FEV vats, together with a small adjacent storage building and a catwalk leading to the rooftop. There's another cooking station on the roof, together with what appears to be an art studio of all things.

The front entrance leads to the lobby together with reception terminals and two doorways. The northwestern one leads to the research center (requiring the access holotape, found in the southeastern part of the facility, in the old Greenhouse Initiative laboratories), connecting to a vat chamber that leads to the mothballed labs and the vats chamber. The southern one connects to the locker room and security office. In the security office are two functional Protectrons that can be released, while the decontamination arch can be activated via the same terminal. The locker room contains a locked safe.

To the southeast lies the aforementioned mothballed Greenhouse Initiative laboratory. The experimental cultivars can be harvested for carrots, tatos, and razorgrain, however, the most important loot lies upstairs. The offices contain the access holotape for the research wing in the southeastern office (together with a safe and terminal), with a chemistry station and a magazine spawn point in the adjacent room. The northwestern balcony connects to the vats' control room.

The vats themselves occupy the western portion of the facility and have two levels. The FEV goo is inert - the player character will not turn into a super mutant - but can be collected. There is a tinker's workbench on the bottom level and the area's steamer trunk in the locked maintenance room near the exit doors to the back (which is where the player character is deposited if they enter through the back).

The research wing is in the northern part of the building and spans two levels. The bottom level contains the various experimentation laboratories, including (clockwise from the upper left) the specimen containment, testing labs, advanced mutations lab, admin desk, and the main specimen lab. the upper floor contains the holding cells, together with the decontamination laboratory. 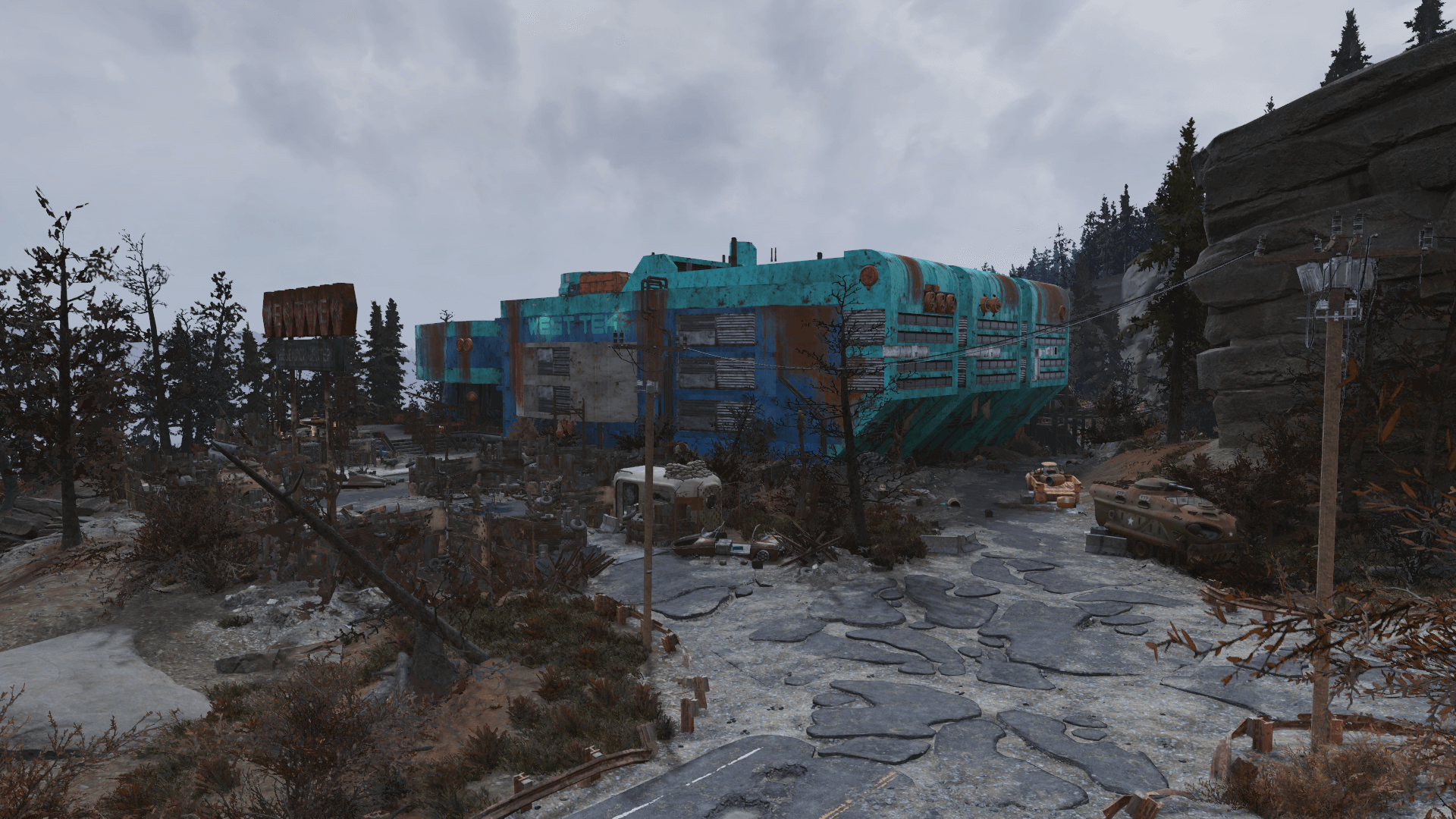 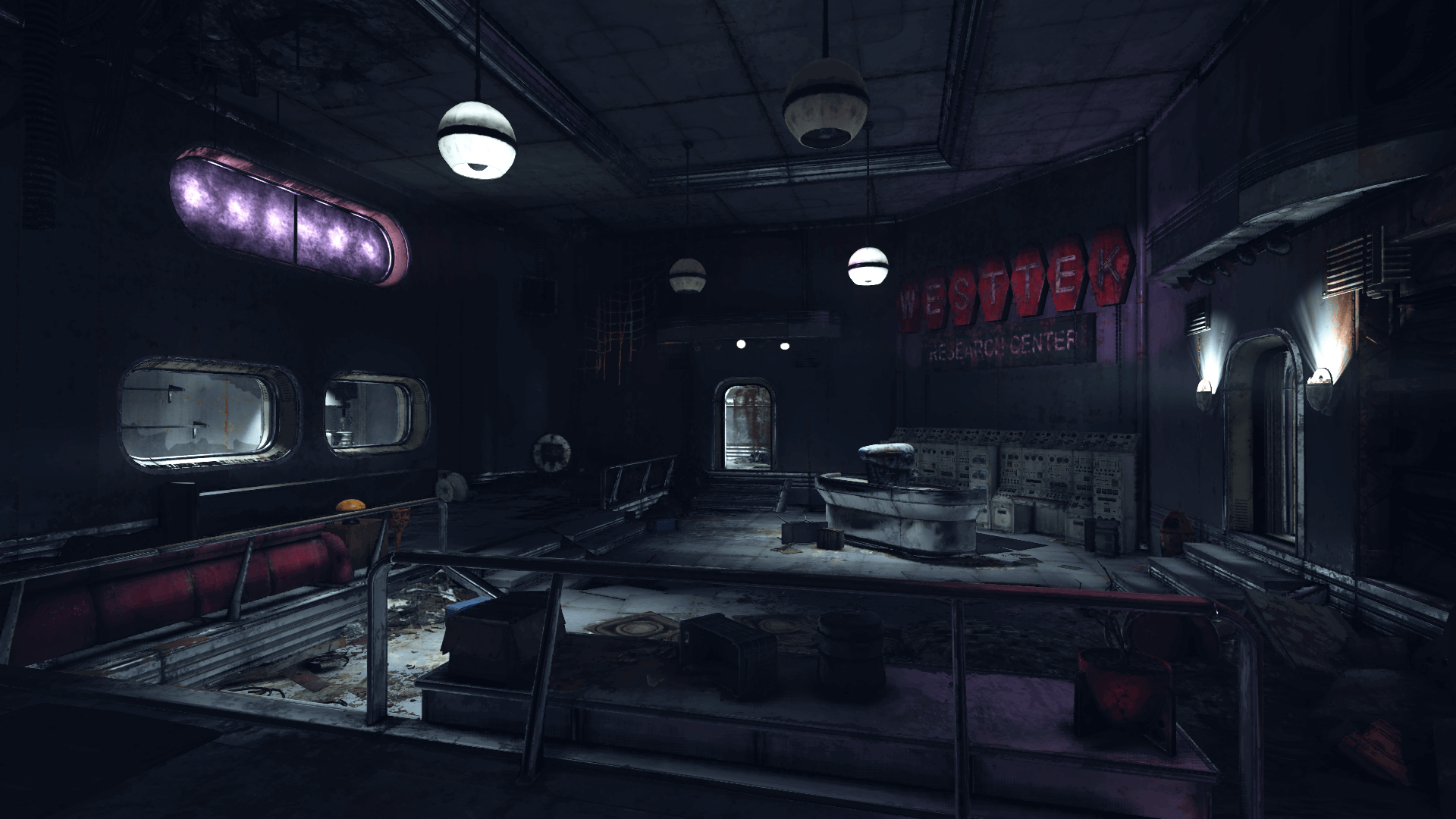 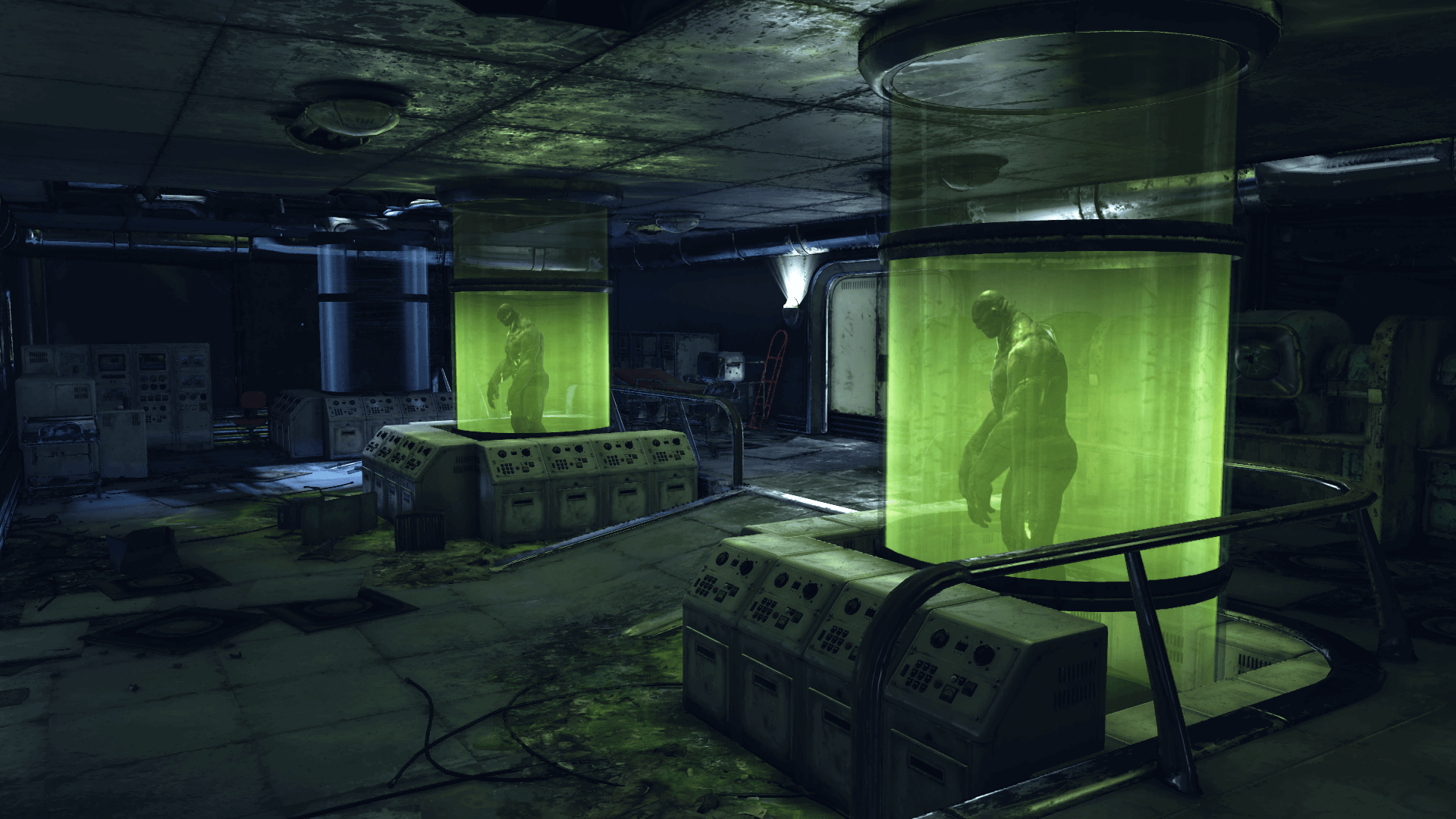 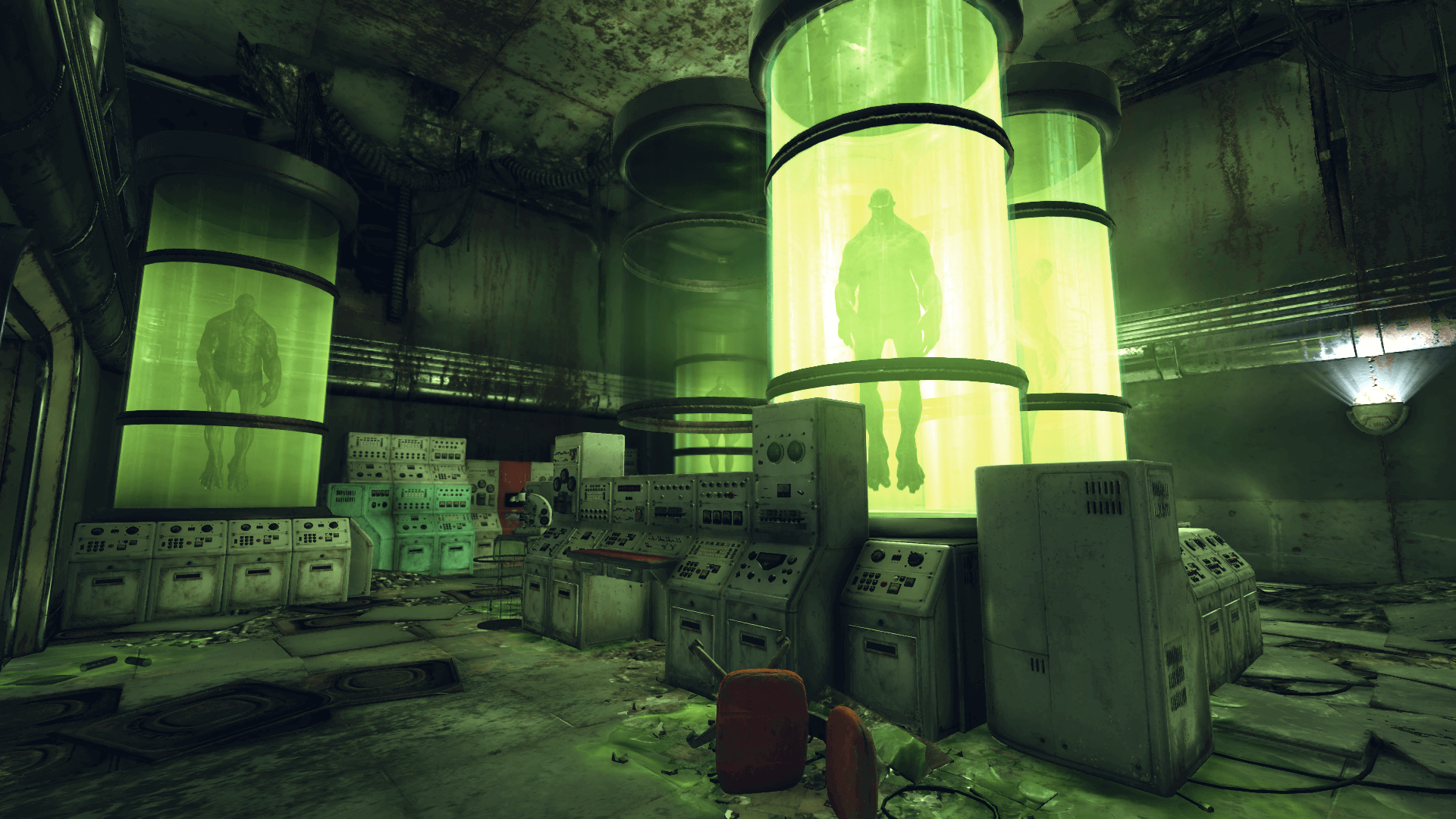 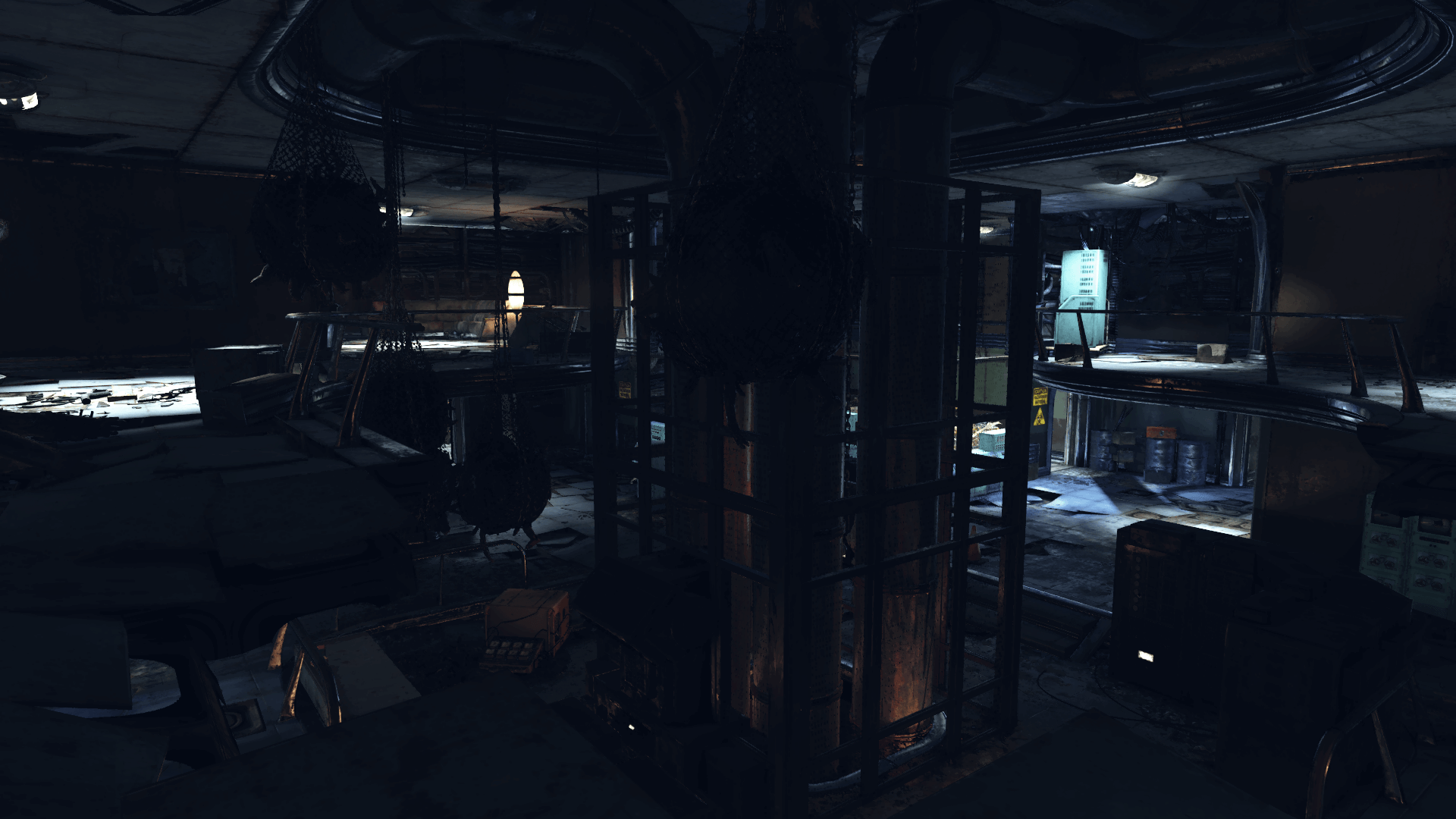 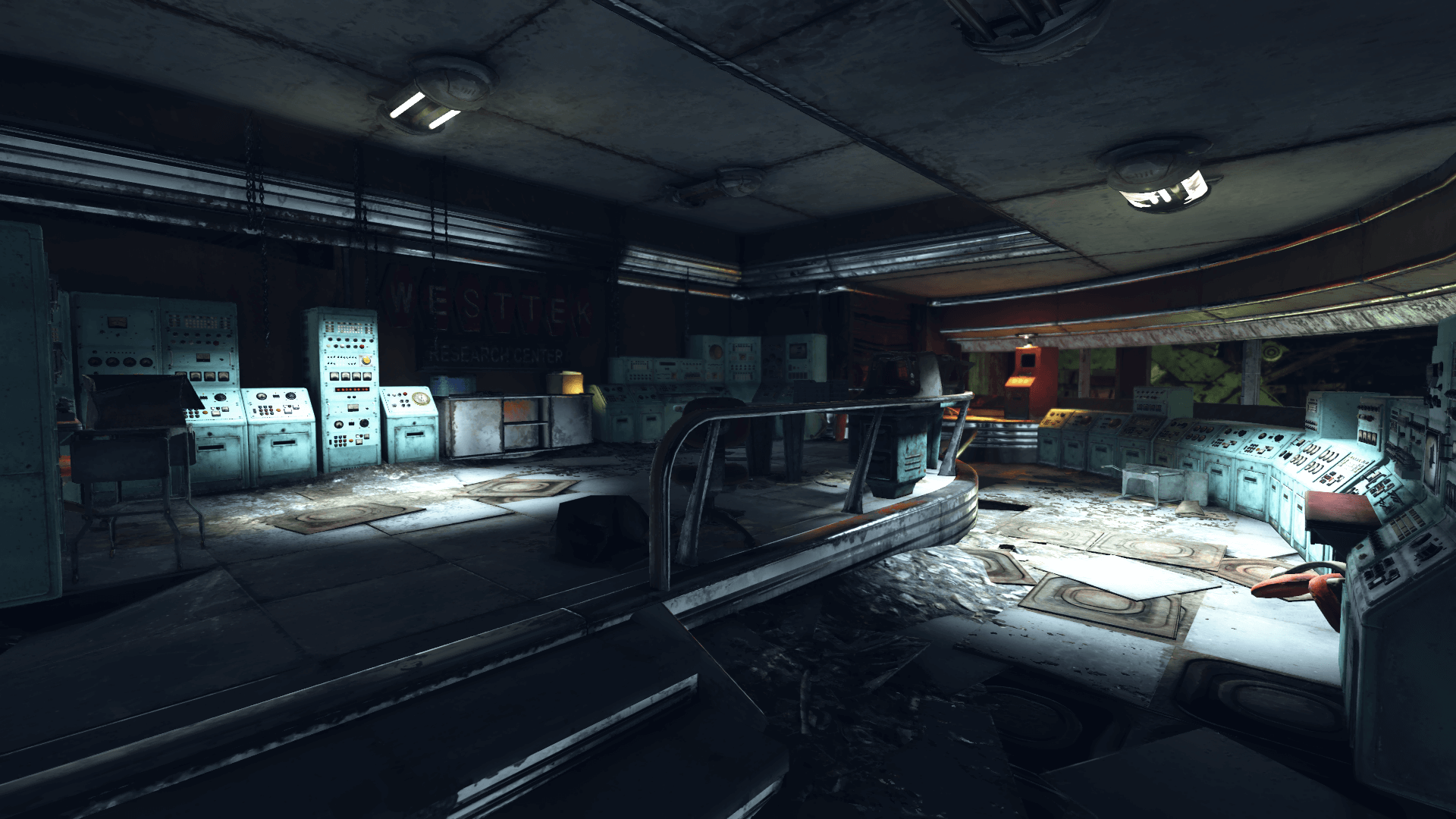 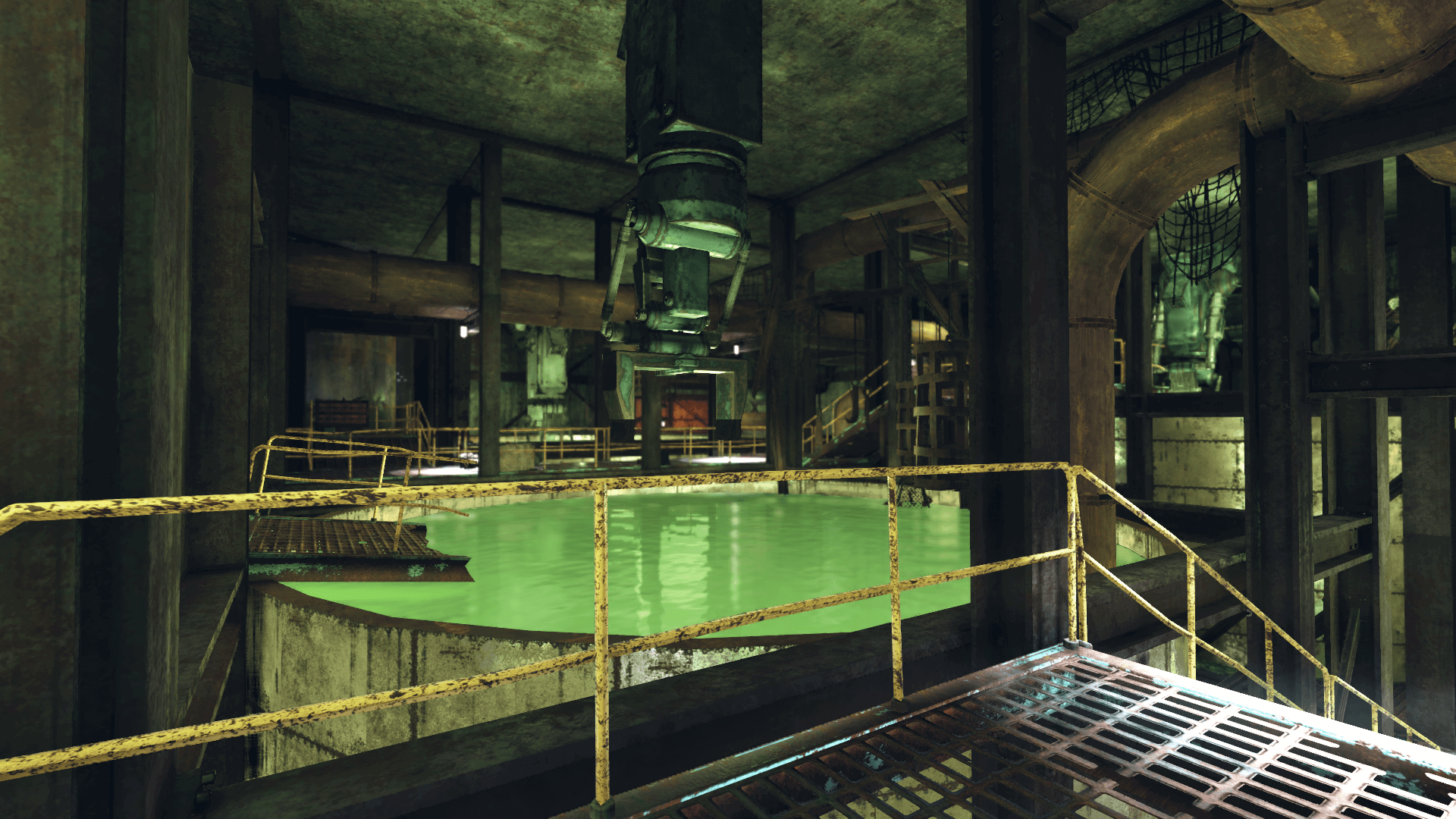